The Tempest is set on a remote island, where Prospero, the exiled Duke of Milan, plots to restore his daughter Miranda to her rightful place, using illusion and skilful manipulation. The eponymous tempest brings to the island Prospero’s usurping brother Antonio and the complicit Alonso, King of Naples. There, his machinations bring about the revelation of Antonio’s low nature, the redemption of Alonso, and the marriage of Miranda to Alonso’s son, Ferdinand.

The Tempest proved a creditable contribution to Shakespeare festival

Despite general opinion that Shakespeare was not meant for a village like Compton, the Downs School, together with members of Compton Players, went ahead undeterred and on Tuesday and Wednesday last week presented their production of The Tempest. And, indeed, it was a creditable contribution to the Shakespeare festival. The Tempest was probably the last of Shakespeare’s plays to be written and although not so easy to understand as some, the cast’s interpretation and understanding was soon conveyed to the audience.

In the first scene unfortunately, although there was obvious panic among the crew, the sound effects were inclined to drown the voices and it was rather difficult to get the gist of the conversation. The opening of the second scene, however, was far more dramatic as the curtains opened to reveal Prospero aloft on the cliffs on, an uninhabited island and alone save for his daughter Miranda and Caliban, a demi-devil. Each of these characters played his part well. Sandy Walton, as the rightful Duke of Milan, suiting the part well, both in appearance and understanding. His effect on the audience was most noticeable in this opening scene and the Epilogue, as they sat in hushed silence. Jane Cruickshank, with her clear well-modulated voice, gave a fine portrayal of a lonely girl brought up away from civilisation with only Prospero and Caliban for company and as regular supporters have come to expect, Andrew Latham just does not exist once he is on that stage and even a professional performer could hardly have made Caliban more convincing, while such excellent make-up made him even more grotesque.

Two more outstanding performances were those given by Nigel Carine as Ariel and Brian Walton as Stephano, a drunken butler. Whether or not his daily occupation as the local landlord gave him a greater insight into the part we shall never know, but he was magnificent. David Bungard as Trinculo was amusing too, and he and Stephano could always be counted on to liven up proceedings if ever the play began to lag a little. They made good contrast to the rather staid (although colourful costume-wise) selection of Lords, none of whom was particularly outstanding although P Monger as Gonzalo, the honest old councillor, was probably the best. Others were R Stanlake, T Stephens, C Baigent and P Palfrey.

Nigel Carine as Ariel deserves special commendation too and for a 13 year-old his comprehension and delivery were superb. His movements were sprightly and every word he spoke audible. Michael Yates as Ferdinand, son to the King of Naples, gave quite a good impression of the dashing young hero. Others taking part were D Greenfield, J Dillon, P Alder, M Staley, C Newman, J Urwin, C Summerfield, A Williams, Barbara Phillips and Brenda Phillips.

As background music G Kinder’s compositions were highly effective, but so as the songs were concerned something simpler would have been appreciated far more, and the audience could have felt nothing but sympathy for C Newman and J Urwin as they struggled with their duet. Such a pity when they could have given a perfect performance of something just a fraction easier.
Scenery was very effectively constructed and painted by D Evans, D Greenfield, and A Jones, with M Holmes responsible for the lighting. Stage manager and assistants were D Parsons, F Walters and L Douch. The play was produced by Sandy Walton. 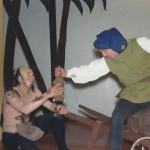 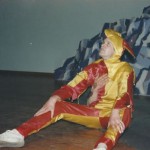 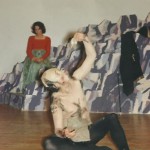 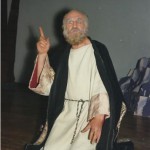