When Barnstable is told he has only eighteen months to live, remarkable changes take place in a families life – until the diagnosis is proved wrong…

When a man is told he has only 12 months to live, he has two choices; to resign himself to his fate, or to really make something of his remaining time. In A Ghost on Tiptoe, presented by Compton Players, the leading character, Barnstable decides to do just that. Set in the flower-power seventies, and written by Robert Morley and Rosemary Anne Sissons, it was conceived as a vehicle for the inimitable Mr Morley.

This production had the benefit of an excellent substitute in Robertson Bell, his looks, mannerisms and dry delivery of the enormous role being a credit to him.

As one would imagine, this was very much a comedy of words, and as such the pace was occasionally a little slow, but producer Eric Saxton and his talented cast certainly got the laughs.

As Barnstable’s wife Nora, Mary Warrington had to age herself, but this she did in a self-efffacing way and she brought out the character well.

In his 50th role on stage for Compton Players, Peter Monger as Henry Poole, Barnstable’s old friend and confidante, created a likeable character, with a wry and effective humour. Brenda Prior as Mrs Barnstable gave us a well-handled piece of character acting, and as Barnstable started to change his conventional existence, and enjoy hitherto unexperienced delights, this created some highly comical moments.

Charles East in his dual role of Roger, hippy then business man, gave good contrast to the different facets of the character, while Marianne Smith comfortably settled into her first role with the players.

Another first timer was Caroline Cook as Poppy. She gave a strong portrayal of the liberated young lady of amazingly easy virtue! H Connolly, first as the Police Constable, then as the drop-out, enjoyably completed a cast that fused together well.

The set construction and décor seemed a bit tatty by previous standards, but the modern art painting on the walls (and on canvas) were great fun. Linking and continuity were slick, and it all proved to be highly enjoyable. It was probably, in the end Robertson Bell’s night, and he deservedly enjoyed it.

Dying to get the laughs!

The Compton Players proved that they welcome people with all levels of experience when they staged A Ghost on Tiptoe at the Coronation Hall last week.

The cast of the comedy includes Peter Monger, in his 50th production for the Players, and also included Marianne Smith and Caroline Cook who were both making their first appearance.

The play tells the story of a business man who mistakenly believes he is suffering from a terminal disease and has only a year to live. The central character, Cuthbert Barnstable, was played by Robertson Bell.

Peter Monger played his executor, Mary Warrington his wife, Brenda Prior his mother and Charles East his son.

Other characters include a hippy girl called Poppy, played by Caroline Cook, and a policemen played by H Connolly.

The stage manager was Ian Hickling and the assistant producer David Hawkins. 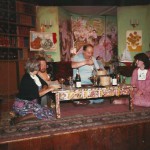 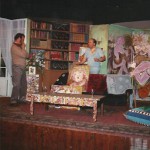 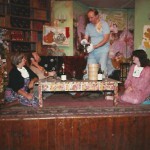 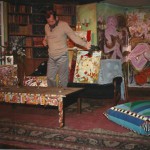 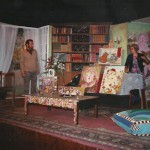 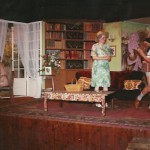 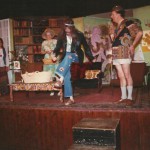 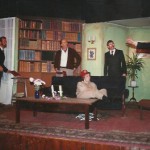 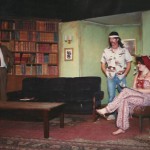 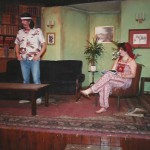