In this classic Victorian thriller Jack Manningham is slowly, deliberately driving his wife, Bella, insane. He has almost succeeded when help arrives in the form of a former detective, Rough, who believes Manningham to be a thief and murderer. Aided by Bella, Rough proves Manningham’s true identity and finally Bella achieves a few moments of sweet revenge for the suffering inflicted on her.

The meticulous care and attention to detail which is always a feature of Compton Players was again much in evidence in Eric Saxton’s production of that splendid thriller, Gaslight, by Patrick Hamilton.

The Victorian era was faithfully represented, right to an inlaid workbox, metal mesh purse and even a newspaper of the time. Not, of course, to mention the gaslight! But more of that later.
The recent death of a former producer, active member and loyal friend, Frank Meakins, was keenly felt by all the Players. They decided their best tribute to him would be to carry on with a Spring production as usual, and their choice has fallen on a play which, although a thriller, is suitable for audiences of all ages.

Gaslight tells of the attempts made by Mr Manningham to drive his wife insane, while at the same time he is searching for some jewels for which 20 years earlier, he has committed murder. His subtle cruelties to his wife were well enacted by Roger Gray, as the suave and villainous Manningham, while Elizabeth Saxton, as his wife, Bella, became the very picture of a terrified browbeaten little woman, her normally crisp, rich voice changed to the thin high pitch of near hysteria, pouring out a rapid torrent of pleas and pacification.

Her humiliation was increased by the insolence of the saucy maid, Nancy, very pertly played by Mary Warrington, and it was a relief to find that at least in her other maid, Elizabeth, there was someone who, if rather bewildered by events, was at least kind and certainly on her mistresses’ side. Elizabeth was played , kindly, but with appropriate wariness, by Marjorie Treacher. But Mr Manningham’s mental and physical cruelty, and Nancy’s insolence, were not the only torment Bella had to bear. When she was left alone in the evenings, she noticed regularly that the gaslight would suddenly dim, as if there was someone in the house using the gas in the forbidden rooms on the top floor…

This dimming and later raising of the gaslight is an integral part of the plot, and Compton Players were able to make exceptionally good use of the brand-new lighting control board which has been specially built for them by two members. Roger Gray did all the electronics, and Joe Hoskins (who is the company photographer for the Players) did the electrical work, and they have provided a very useful and extremely effective apparatus.

Fortunately for Bella’s sanity and safety, into her life came inspector – formerly Sergeant – Rough, whose dogged determination to solve a 20-year-old crime, had made him keep an eye on this house. He enlisted Bella’s aid and between them Manningham was finally brought to justice.

By far the most onerous roles were those of Mrs Manningham and Inspector Rough. Elizabeth Saxton is a talented and versatile actress whom it is always a pleasure to watch. As Rough, Peter Monger displayed a reassuring kindliness and strength of character, with an unswerving absorption in his self-appointed task, and he gave one of his best performances to date.

Throughout this very well-directed play, a high standard of acting was achieved by all the cast, and Compton Players, their producer Eric Saxton, and all the backstage helpers deserve congratulations on yet another splendid presentation. 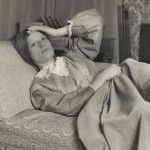 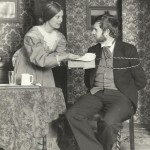 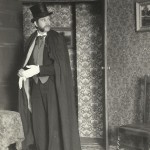 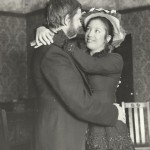 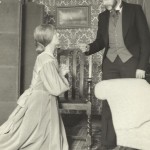 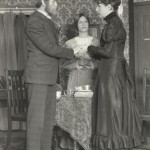 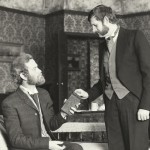 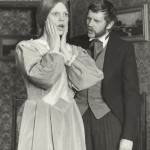 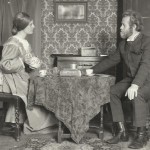 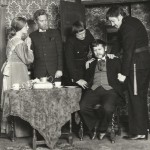 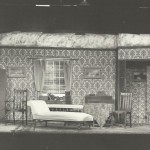