Ada Brightwell’s husband Bertram has left his family and hasn’t been heard from since. Desperate to have him return, Ada resorts to offering to sell her soul to the devil. This sets into motion an intriguing comedy revolving around Ada’s marriage bureau and the arrival of Mr Nicholas, Bertam’s ‘friend’…

Lucky Compton Players to have a brand-new play by Georgina Reid to present to enthusiastic audiences last week.

Flowers of Sulphur, like The Joy Ride which they presented last year, again demonstrates its author’s wit and homely wisdom, and her ability, not only to devise a good plot, but also to utilise the well-drawn characters to further the plot.

Set in early Edwardian England (and what a popular era that is just now!) Flowers of Sulphur nicely contrasts the romanticism of Ada Brightwell and her maidservant Bridget with the very practical outlook of Ada’s daughter Lucy, and her admirable and wholly sensible music teacher, Miss Honoria Crabbe.

Incurably romantic Mrs Brightwell feels no bitterness against her husband Bertram who had left his little family 10 years previously to explore the Congo. “It was such a romantic thing to do,” she explains. But his bank balance no longer seems as adequate as it did when he left. Although she ekes out her money by running a small marriage bureau, she badly needs her husband’s help and advice. “If only he would come back, I would sell my soul to the devil.”

Were her words overheard by His Sulphuric Highness? It seemed a strange coincidence that Miss Crabbe’s sensible suggestion of taking a lodger, should so soon be followed by the appearance of Mr Nicholas (“I am not at liberty to reveal my real name at the moment”), looking for lodgings, and the equally unexpected return of Bertram.

Not until the maid, Bridget, has been left, like several of Mrs Brightwell’s recent marriage bureau clients, “waiting at the church,” did Miss Crabbe and Lucy put two and two together and uncloak the villain. All, yes all, was satisfactorily explained in the end. Too satisfactorily for Miss Crabbe and Lucy, who succeeded in throwing a final doubt into the audience’s minds. Who – (if you will pardon the expression) – who the devil could Mr Nicholas have been?

My husband and daughter would have preferred to have less plausible explanations from Mr Nicholas. I was happy that all the ends could be, and were, duly tied up – but I make my own mental reservations about Mr Nicholas’ identity.

The cast thoroughly enjoyed this play and communicated their enjoyment to the audience right from the start. Molly Gray’s slightly adenoidal and wistfully romantic interpretation of Ada Brightwell was charming, and Mary Warrington was suitably forthright as her practical daughter Lucy. Katherine Jones was a very creditable Miss Crabbe, and Lynne Stephens in only her second role with the Players, was good as the maidservant.

Peter Monger was as bemused as one might suppose a man would be after suffering two serious losses of memory, the second of which blotted out all recollections of his last ten years in Africa. Roger Gray as Mr Nicholas played three roles in one, for he appeared in different guises as supposed marriage bureau clients, and coped with all very nicely. Production was again in the hands of Eric Saxton, who also designed the set with great attention to detail – flocked wallpaper, chenille tablecloth, family photographs (in sepia of course), a speaking tube(of more significance than might first appear) and a genuine, openable sash window built into the set.

Authoress Georgina Reid was in the audience on the last evening, with her family, and looked pleased with the production. She was also able to meet the producer of a society in Kent who had produced her earlier play The Joy Ride recently, and had made a special journey from Kent in order to see her latest play.

It is not often that a small country drama group can lay claim to a ‘world premiere’, but such was the case when the Compton Players staged Flowers of Sulphur on 1st, 2nd & 3rd May. Their adept production of her previous play, The Joy Ride, in 1974 can have left few qualms in the mind of authoress Georgina Reid as to their ability to handle a brand new vehicle and, surely, she was not disappointed the night she was in the audience.

Set in the early days of this century, when darkest Africa was something more than a jet-hop away, the play opens on the predicament of Ada Brightwell, whose husband Bertram has left his family some ten years earlier on an expedition to the Congo and has not been heard of since. Household funds are running short, even though supplemented by the profits of Ada’s small marriage bureau, and she badly misses the comfort and financial security of her husband. So much so, that in a rash moment she offers to sell her soul to the devil if only husband would return. Hardly are these words uttered when the plausible Mr Nicholas arrives bearing a letter from his so-called friend Bertram and seeking lodgings. Ada welcomes him into the household and, when Bertram himself appears out of the blue and fails to recognise Mr Nicholas, the now well-entrenched lodger is able to put this down to a bad case of amnesia and turn his attention to the running of the marriage bureau. But the suspicions of Ada’s daughter Lucy and her practical piano teacher Miss Crabbe have been aroused and, when housemaid Bridget is jilted, in common with several other young ladies on the marriage bureau’s register, they solve mystery and extract a neat confession. Even that strange smell of sulphur is explained. Or is it? At the final curtain call we are left to wonder again.

This was an entertaining play, full of comedy, good lines and amusing situations. My only reservation concerns the ending: it was as if Georgina Reid added the final ‘sting’ as an afterthought, feeling perhaps that her original explanation was too pat.

A good small cast was headed by Molly Gray as Ada Brightwell, relaxed and, as always, best in a comedy part. Molly’s husband Roger played Mr Nicholas, but he was given two extra bites of the cherry as Mr Nicholas in disguise, first impersonating a French nobleman, accent most authentic, and next a doddery old clergyman. Roger loves a meat role and was far better in the two character parts. Katherine Jones, who I hear may sadly soon be leaving Compton, is another who thrives on a character role: her Honoria Crabbe was well thought out and full of tart humour. Lynne Stephens as Bridget the maid followed up the good impression she had made on her debut, Dazzling Prospect, but her diction does sometimes lean towards flatness: experience and confidence will put that right. Mary Warrington was once again allowed to remove her apron, although the plot did demand its temporary return, and made a convincing and vivacious Lucy. Last but not least, Peter Monger portrayed to perfection a bewildered Bertram who found the situation just too much for him.

This completely new play must have been a challenge to Eric Saxton’s production but, without the preconceptions of standardised moves and stage directions, he was able to do it his way and right well did he succeed.

In recent years the standard of set and lighting has been extremely high and this was no exception: possibly the solidest most authentic set yet. All in all it was a memorable Production.

This letter was received by the producer from the author

This is not just a “bread & butter letter” – I really mean it, when I say thank you so much for giving my play such an excellent start in life. You took a risk in producing a completely unknown play, and naturally I wondered how it would stand up to the test of being transferred from the written word to the stage.

The result was all I had hoped for, and I am most grateful for all the hard work & loving care you put into it.

The scenery was delightful, as I knew it would be, and the actors are to be congratulated on the way they put across their lines with speed, character and humour. I wonder what Mrs Black will say about it in the Newbury Weekly News. Whether she liked the play or not, she must surely admire the production. I think you managed Nicholas’ unmasking very well. He certainly played the three different roles with admirable versatility, and I liked the end of the first act when he sat cross-legged on the sofa like a little red devil…

Grateful thanks again
from
Muriel Slater*

*Georgina Reid was the pen name of Muriel Slater 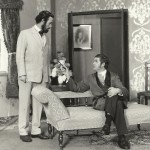 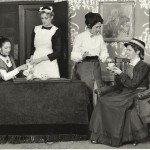 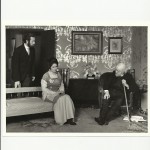 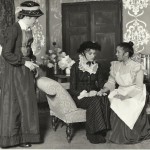 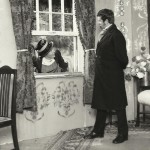 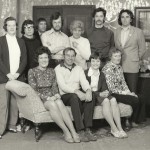 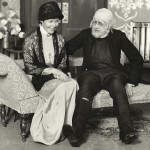 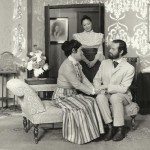 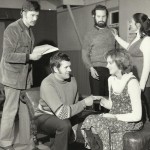 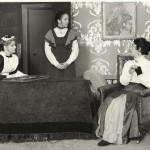 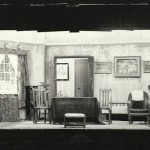 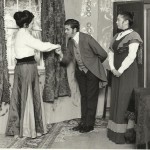