Poppy Field
Mrs Kingsley… A women who’s hard to like but impossible to ignore, runs the reception area with a rod of iron which includes Daniel the very accommodating caretaker. Thrown into her totalitarian world is Poppy, a young work experience girl whose wry sense of humour and fun irritates her prickly dictator, and Tom, a lost soul who’s valiantly trying to justify his life’s work so he can lift the monkey from his back.

Spare the Rod
In the summer of 1965 the world was a changing place; for the first time women had the pill and a chance to plan their own destiny. Teenagers had pop music, money in their pockets and a desire to look and sound different from the austere outlook of the war generations.

Schools were also changing with the abolition of the 11 plus being considered and the forming of new comprehensives, bringing about a clash between the young teachers who wanted to lead them into the bright new light and the old Edwardian guard determined to protect and keep what they held true. This is a village school’s story of that time. 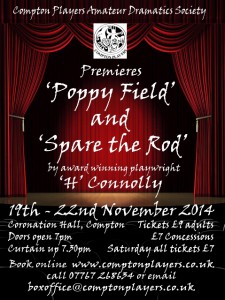 Poppy Field was about a young girl, Ms Field of the title, taking a work experience job at a publishing house under the reception area dragon, a fierce and menacing Mrs Kingsley, played vigorously by Mary Warrington. Poppy, played with a nice humorous touch by Naomi Read, gradually asserts herself in the face of great provocation and we are soon into what seems like a broad, somewhat ribald comedy, concerning Mrs Kingsley’s amorous adventures with the caretaker, Daniel, portrayed by Dave Hawkins, with most of the ‘activity’ off stage but with some of the sound effects. The play then gradually segues into a ghost story, with the appearance of a young First World War soldier, Andy Alexander, leading to a surprise ending. The problem was that the ‘gripping’ ending was rather undermined by the lightweight comedy routines and sexual shenanigans of Kingsley and the caretaker and the play seemed to be neither one thing nor the other.

Full marks to the hard working cast and their stage movements though, well-paced and directed by the author.

The second play, Spare the Rod, presented even more difficulties. It is summer of 1965 and times are a-changin’ in schools, (cue Bob Dylan music) the 11-plus is under threat, and the old guard of teachers are fiercely defending traditional methods against the new, young teachers coming in. Mark Bailey and Helen Saxton did well as the administrators trying to sort out an assault between old-style head Mr Dutton (Paul Shave) and the young, new ideas man, Mr Wheeler (Pete Watt). Liz Saxton gave an impressive performance as the older, bitter, Miss Gosling and again the acting and stage movement from all the cast was first-class. As to the in-fighting between old and new, the traditionalists against the new comprehensives, it all seemed to be rather overblown and exaggerated. Wheeler, as played by Pete Watt, was more of a caricature than a real 60s teacher and Paul Shave, as Dutton, needed more authority and sense of an unchanging, unchangeable dinosaur.

As with previous productions, the overall performances from the actors was extremely good and the stage direction was well-structured.