by Edward Percy and Reginald Denham

Based on a famous murder in the 19th century, this is set in a remote, lonely house on the marshes of the Thames estuary. An ex–actress lives with her companion; a visit from two eccentric sisters who make themselves at home precipitates events, compounded by the arrival of a mysterious nephew. The result is disappearance and murder… 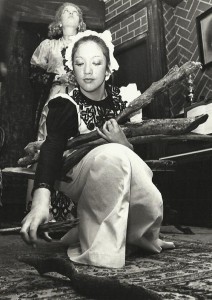 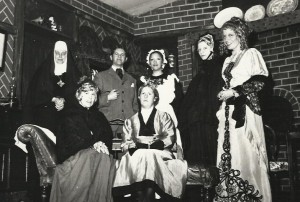 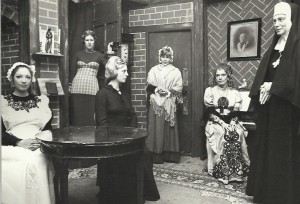 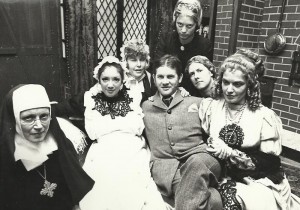 Really excellent character portrayals, good teamwork, a most attractive set (designed by Eric Saxton, and built by members of the cast) and some delightful Victorian clothes (supplied by the Berks County Drama Department and the Bucklebury Players), help to make Compton Player’s presentation of E Percy and R Denham’s thriller Ladies in Retirement a most enjoyable and worthwhile production. It is pleasant to be able to record that they played to larger-than-usual audiences on Thursday and Friday, and to a packed house on Saturday.

Set in a lonely old house on the marshes of the Thames estuary, the action takes place in the summer and autumn of 1885. A former actress, Leonora Fiske, lives in this house with her companion, Ellen Creed, and her maid, Lucy. They are joined by Ellen’s two dependent sisters, Louisa and Emily, ostensibly for a short holiday, but the holiday lengthens.

Louisa and Emily are both mentally retarded, although uncannily shrewd and sensitive to atmosphere. They do not get on with Miss Fiske, but when she tells Ellen that they must leave, Ellen, who has hitherto appeared most saint-like, takes drastic action to ensure that they can remain. The old bake-oven at the back of the room, assumes a sinister aspect.

At first, believing that Miss Fiske has sold the house to their sister, Louisa and Emily, are unsuspicious, but when their nephew, Albert (who has previously met and been helped by Miss Fiske), arrives – this time on the run from the police – events move inexorably to a disclosure of the truth.

Under Eric Saxton’s able direction, the atmosphere and tension were skilfully built-up and maintained, although the play has its moments of humour.

The contrast between Sally Reid’s Leonora, vivid in her dress and in her recollections of former conquests on and off-stage, and the sober restrained dignity of Elizabeth Saxton’s Ellen, ever watchful of her sisters’ behaviour and their welfare, was well-drawn.

Katherine Jones and Molly Gray put up splendid performances as the two dependent sisters, showing real insight in their portrayal of their characters. Emily (Molly Gray) was passionately intense in her efforts to find a use for all manner of flotsam and jetsam collected on her walks, while Louisa (Katherine Jones) was convincingly timorous as the gentler of the two.

All these roles could so easily have been ruined by over-acting. That they were not, reflects great credit on the cast and their producer.

Roger Gray, the only man in the cast, showed Albert as a plausible and even likeable rogue. It was small wonder that he won his old aunts’ hearts with his cheerful nonsense, and made such an easy conquest of Lucy. Jean Adlem played the nun, Sister Theresa, two brought the final warning to Albert.

One or two lines were fluffed on the final night of the play, but this was not enough to disturb the flow of the action, or indeed slow the pace, which was well-maintained throughout.

The Players expect to have covered the cost of this production, and their next function will be a bazaar in June to raise funds for lighting and other stage equipment.

“The longest shaggy dog story ever,” whispered my neighbour as the final scene of Ladies in Retirement drew to a close and I was inclined to agree with him. This Victorian costume melodrama by E Percy and R Denham was presented by the Compton Players in the Coronation Hall on 10th, 11th and 12th May. It is certainly the best staged production I have yet seen in the Hall; the set was solid, authentic and well-furnished, the costumes excellent and the standard of acting as usual high, but the story line never maintained its early promise.

The scene is set in a remote house amidst the Thames marshes where wealthy Leonora Fiske, once a demi-mondaine of some repute, lives in comfortable retirement with her companion, Ellen Creed, and her youthful maid. All is well until Ellen’s sisters come for a holiday. Ellen feels that she can at least offer them a permanent home under her protection but, as the holiday stretches into months, Leonora, exasperated by the foibles of the two simple souls, insists that they leave. Ellen is faced with an unpleasant choice: sever her family ties or arrange for Leonora’s prompt dispatch. As the curtain falls on act I and she approaches Leonora with a knotted scarf we are left in no doubt as to her decision. The story having ended we are left to wonder dreamily through the two final Acts whether Ellen’s crime will come to light. With the arrival of her ne’er-do-well nephew on the run from the police it becomes apparent that, thanks to methods reminiscent of the Watergate affair, he has sorted things out. What is unfortunate for him and his aunt Ellen is that the final explanation is overheard by the maid who runs screaming to the police and so, at long last, justice is done.

Don’t get me wrong: I enjoyed my evening and the acting was impressive. Elizabeth Saxton is the nicest person in real life. In the part of Ellen Creed she maintained a well-judged balance between a ruthless, although perhaps remorseful, killer and a warm-hearted protective sister. Kate Jones and Molly Gray kept up a fine contrast between the two visiting-sisters: Kate tactless, feather-brained and loveable, Molly quiet and withdrawn, more at home ith the wild things of the sea-shore than her fellow human beings. Sally Reid’s success in previous productions was followed up with another first-rate performance as the unfortunate Leonora. She exuded all the seedy charm and blowsy good looks of a once-popular showgirl and I was glad to see that she was in fact wearing a wig! I hope Mary Herring won’t be confined for ever below stairs or, as in another production, to the typing pool. She has a first-rate stage presence, a nice sense of comedy and, no doubt, the Compton Players are grooming her for better things. I don’t quite know what contribution the character of Sister Theresa made to the plot but Jean Adlem’s admirably nun-like bearing was only slightly marred by the odd moment of inaudibility. Roger Gray who played nephew Albert was the only man to appear on stage. Once again he had thought his part out carefully and extracted all the comedy: he was in no way outshone by the fairer sex. It was disappointing not to see Peter Monger’s name on the cast list, but in the event we were not to be disappointed. I understand his voice ‘off’ got a laugh at each performance!

Eric Saxton’s production was, as usual, very professional and the Compton Players have come a long way over the years. When I first became involved in amateur dramatics at the Coronation Hall I thought that the very nature of the Hall precluded a slick production in a realistic setting. How very wrong I have been proved.