How The Other Half Loves concerns three couples: Frank and Fiona Foster; Bob and Teresa Phillips; William and Mary Featherstone. Frank employs both Bob and William and is considering promoting the latter. Bob is having an affair with Frank’s wife Fiona and is in constant conflict with his own wife, Teresa. She feels Bob is neglecting her while she raises their baby and is suspicious of his actions and phantom phone-calls made to the house. When he returns late, she confronts him about his actions and he lies that he has been comforting work associate William, who believes his wife Mary is having an affair.

Last time the Compton Players produced a play by Alan Ayckbourn, I laughed until my ribs ached. Last week, they presented another of his comedies, How the Other Half Loves, and I laughed till I cried.

Admittedly it took a little time on the first evening for the humour to come across. For a start, it was a very complicated set which met our eyes when the curtains parted.
The action takes place in the living rooms of two families, the Fosters and the Phillips, and these are both represented in the set, but very cleverly dovetailed into one another – the colour of the walls indicating to which family they belonged.

Then again, it was a bit confusing at first to find both families on stage at the same time, but hurtling past each other, without acknowledging each other’s presence.
Once the penny dropped, however, it was not difficult to follow and the audience could sit back and really enjoy the marital mix-up which Alan Ayckbourn had planned for the three couples in his play.

All three men in the story work for the same firm, Frank Foster being the senior, who takes a paternal interest in the two younger men, Bob Phillips and William Featherstone.
Frank’s wife, Fiona, is cool, competent and sophisticated, while Bob Phillips wife is a scatterbrained, feckless housewife and Mary Featherstone a pathetically neurotic woman, totally under her husband’s thumb – until the end of the play, that is! Fiona and Bob have indescreetly spent a very long evening in each other’s company and each has hinted strongly to their spouse that they have been with one of the Featherstones, whose marriage is, according to them, on the rocks.

Both Frank Foster and Terry Phillips resolve to do something about this, Frank at an already arranged dinner-party and Terry at a party which she promptly fixes. This leads to one of the funniest scenes, for both dinner parties are presented on stage simultaneously, although they take place on consecutive nights!

It is not only the situation which gives rise to the comedy, but also the interplay of these six very different characters. Producer David Baird handled the situation very competently, and his six players put on their best performance to date in bringing their characters to life on stage.

Special praise should go to Marjorie Treacher for her sophisticated poise as Fiona Foster, and to Peter Monger for conveying the wooly-minded kindness of her husband Frank. Elizabeth Saxton, versatile as ever, presented a convincingly neurotic Mary Featherstone, and won spontaneous applause when she finally decided to be the dominating partner in her marriage.

Roger Gray was very confident as the mildly philandering Bob Phillips, and Mary Warrington completely scatterbrained as his wife Terry, with Nick Roberts turning up obligingly and at the double every time the Fosters called on him to do some minor repairs about their house.

This was kept bowling along at a really fast pace with one crisis following another till it seemed nothing could ever extricate these three families from their difficulties.

Miraculously they were extricated from the muddle, and just as it seemed the play would end tidily, a telephone conversation between Frank and Terry promised more misunderstandings yet. There must be a sequel to this, but for the sake of our aching ribs, let’s hope it won’t be just yet!

Eric Saxton was responsible for the very complex set design, and stage management, with Roger Gray in charge of lighting, and Pauline Owen, Pauline Hall and Marilyn Barrell in charge of props. 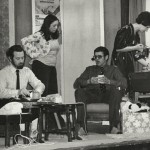 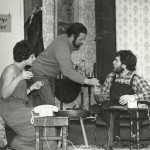 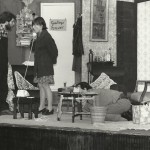 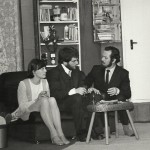 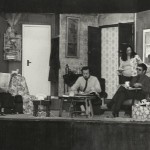 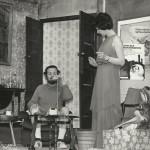 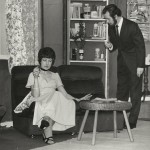 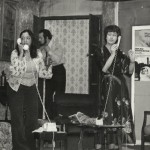