Joseph Dymond does not want to leave the house where he has lived for all of his considerable life, particularly after he learns that there is something of value hidden in his garden. A decision to flood the valley in which he lives causes tension as he and several members of his family and friends are trapped in his house with the waters rising…

Premiere of new play at Compton

Georgina Reid alias Mrs Muriel Slater, attended the opening night of the premiere of her new play, The Sinking of Joseph Dymond when it was presented by Compton Players at the Coronation Hall, Compton, last week. The producer was Eric Saxton.

Humour and suspense were both features of this play in which a cantankerous old man at first holds out against a decision to flood the valley in which he has lived all his life, then agrees to move, only to change his mind at the last moment when he learns there could be something of value in his garden. He omits to let the authorities know of his change of heart and the last scenes are played with everyone aware that the flood waters are rising.

There are other complications too. By this time, not only the old man and his sister Lottie who keeps house for him, but also his other sister, a retired schoolmistress, his nephew and his nephew’s pregnant fiancée, are also in the house and to add further complications, so are the local minister and his wife. Each time that it looks as though they will get away safely some fresh disaster strikes, occasionally with the malevolent assistance of the old man, Joseph Dymond.

It may not sound a funny situation, but Georgina Reid’s drily humorous dialogue ensures constant chuckles throughout. There were extremely good character studies by Charles East as the old man, Elizabeth Saxton as his housekeeping sister, Lottie, and Val Wardle as Elsa Billington, the village girl who has married the local minister and is now much more respectable than she may have been in the past. Mary Warrington who took over the role of the other sister at short notice contrived to look the part of a very staid and elderly schoolmistress.

Peter Monger played the minister, and Ian Hickling and Enid Farr brought in more than a hint of modern sophistication and, alas, amorality, as the nephew (an escaped convict) – and his fiancée who has connived at his escape.

On the first night it was disappointing that rather too many prompts were needed, and the pace was decidedly slow I the second scene. However, producer Eric Saxton was very much aware of these first-night ‘hiccoughs’ and no doubt there would be improvements on subsequent nights. 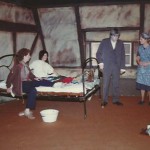 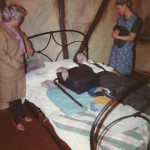 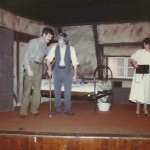 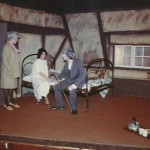 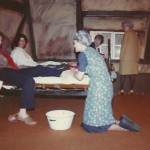 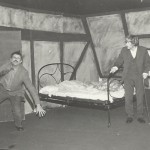 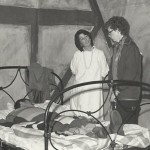 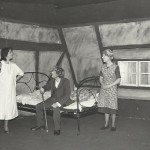 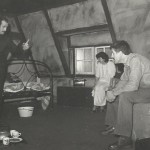