A young man, as a prank, pulls the communication cord and now six passengers find themselves in a waiting room having missed their connection. It is a dark and stormy night and the station master warns them of a “ghost train” but they decide to stay in the waiting room so that they can catch the first morning train. A young woman in evening dress suddenly turns up and the station master is discovered – dead.

Compton Players’ latest production, The Ghost Train by Arnold Ridley is a well written ghost story with a difference, and the cast succeeded in keeping the audience balanced on a knife edge between mirth and drama.

The action takes place in a station waiting room in 1925, and revolves around six passengers who are stranded for the night. The unhelpful Cornish stationmaster, played by Mike Martin, regales them with stories of a ghost train.

The emotional sparring between the married couple played by Peter Monger and Mary Warrington, and the anxiety of Cathy Hawkins and Nick Roberts who play two newlyweds is relieved by the humour provided by Marjorie Treacher, in the guise of a nervous elderly spinster and a young rather brainless upper-class fellow, admirably played by Charles East.

The discovery of the stationmaster’s body on the platform builds up an atmosphere of suspicion, and causes the spinster to imbibe a large dose of brandy, which sends her to sleep.

The mystery deepens when a distraught young woman, played by Elizabeth Saxton, sweeps into the room, closely followed by Ian Hickling who plays her brother and H Connolly who plays a German doctor. She claims to have seen the ghost train and the tension mounts until the train itself passes and the passengers discover that they are locked in.

After many ghostly bangings and figures with lanterns, the young man reveals his true character and takes charge as the intrepid police detective. He explains that the young lady, together with her brother and the doctor, have been smuggling guns. The story ends in true fairy tale style when a large policeman played by Rob Bell arrives in the nick of time. The two couples solve their problems and the spinster awakes, having slept right through the action.

The play was produced by John Sanford and included two new members of the Players, Cathy Hawkins and H Connolly. Despite an occasional first night prompt, the cast maintained the high standard of production which the village has come to expect and provided a most enjoyable evening’s entertainment. 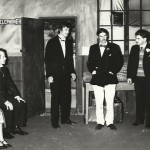 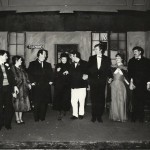 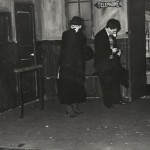 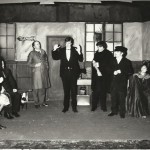