This intriguing thriller follows events leading up to the arrest of the Krogers, two Americans spying for the Russians, in London in 1961.

Spies across the road

An intriguing play, a strong cast, a packed audience, a well-dressed set; the ideal ingredients for Compton Players’ production of Pack of Lies, written by Hugh Whitemore. From the first scene the pace of the action held the attention completely.

The play in two acts, is set in a dwelling in a suburb of London during the winter of 1960-61. The programme notes advise the main events of the story are mostly true.

Each character, individually, at the commencement of every scene, provides a soliloquy to the ensuing theatre – this scenario, especially the lighting, was extremely well directed by producer Enid Farr and the stage crew.

Dave Hawkins warmed to the part of the paternal Bob Jackson, and his wife Barbara, an amateur dressmaker and artist, was given a most accomplished performance by Mary Warrington, as their daughter, Tracey Brett brought an inquisitive naivety to a convincing portrayal of the precocious Julie.

The Jacksons’ mundane life is disrupted by the entrance of Stewart from Scotland Yard, wishing to undertake an undercover surveillance on their neighbours, the Krogers, with whom the Hawkins had become friendly.

The Krogers, suspected of espionage with the Russians and eventually arrested and deported, were played with panache by Elizabeth Saxton as Helen and Ian Hickling as her husband Peter.

Stewart was played with clinical, cold efficiency, sinister and powerful, by Mike Long, while his minions from the Yard were played efficiently by Rebecca Jones (Thelma) and Brenda Prior (Sally). Their tête-a-têtes with the nervous and distressed Barbara were most realistic.

The front of the house was hushed as, in Bob’s final speech, he relates how Barbara passed away following the harrowing experience which hastened her demise.
The considerable applause at the final curtain signified another success for this ambitious group. 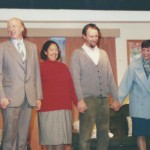 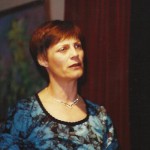 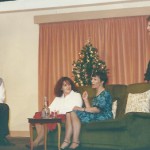 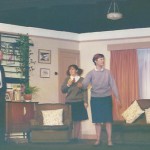 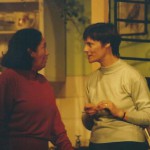