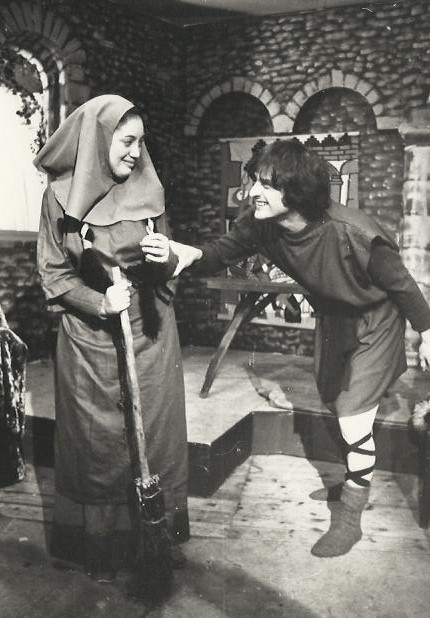 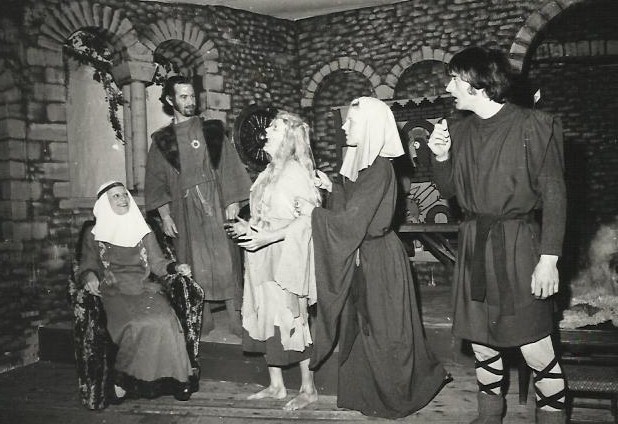 “Who rode the white horse, children?” “Lady Godiva rode the white horse”… or did she?
A strikingly original and humorous challenge to an old-established story is the theme of Georgina Reid’s comedy The Joy Ride, which was presented for three nights last week by the Compton Player, under the direction of Eric Saxton.

The play opens on the morning of the fateful ride. A young baker’s boy, Thomas, arrives at the castle to seek a job as Leofric’s entertainer. His particular talents lie in composing rhymes, so his first task is to compose a verse about Godiva’s forthcoming ride …. A task for which he lacks imagination, and so becomes the first Peeping Tom.

Happily in this play, he does not lose his sight because of it! Philip Seymour played this role very successfully conveying Thomas’ nervous disposition, and speaking the rhymester’s verses with great expression.

The whole of the plot of course centres on Lady Godiva herself, and Elizabeth Saxton conveyed Godiva’s changing moods of reluctance, arrogance, archness, despair and joy not only in her speech, but also by facial expression and every movement, without ever spoiling the effect by exaggeration. Her one tipsy scene, just before the great ride, was very well controlled.

Just why it should ever be necessary for Godiva to ride naked through the streets of Coventry (albeit escorted by six nuns with downcast eyes) has always been a bit of a puzzle. According to The Joy Ride, Leofric was really a kind-hearted chap who wanted to be able to cut the taxes on the poor without losing his image of being very strong and stern!
A vision had appeared to a soothsayer, Old Moll, in which Leofric had said he would remit the taxes if his wife rode naked through the streets. It thus became Godiva’s destiny to do so. Old Moll in fact had a very comfortable niche at the castle and a lot of on influence, largely thanks to her faculty for knowing more than was comfortable for other people!

Katherine Jones played Old Moll with great confidence and a supreme disregard for the rank of the people she addressed. Home truths came very readily to her tongue, whether she spoke to Godiva’s austere and forbidding mother, Lady Hilda, or any other member of the family. Her final vision of the Blitz on Coventry, was vividly described by her, and with sound effects of bombers droning overhead, flashes of light and the red glow of Coventry burning, this was a very moving experience indeed.

These three characters played a very significant part in the play, and were extremely well-portrayed, but the cast as a whole was particularly well-balanced, and the movement and diction was uniformly high. Peter Monger, who this year completes 25 years with the players, played Leofric with dignity. Jill Collier was a very self-possessed and resourceful Hilda, and Carolyn Williams was Godiva’s younger sister, Christina.

Besides producing the play, designing and helping to make the very solid-looking scenery (the stone interior of a castle), Eric Saxton also took the part of Edgar, Christina’s husband. Mary Herring was the pert, bright-eyed maidservant, who, with Thomas had the last laugh as the curtains closed on a severe bout of sneezing…

“Who rode the white horse, children?”

A Who Dun It without a crime was the novel theme of The Joy Ride which was performed by the Compton Players on 2nd, 3rd and 4th May. Georgina Reid’s original comedy was based on Godiva’s ride through the streets of Coventry but, if there was no crime, there was certainly a body; very much alive, very beautiful and very naked, although, I hasten to add, no-one in the Coronation Hall except Peeping Tom was lucky enough to witness it in its latter state!The question posed by the play was; who did Tom really see? Was it Godiva herself? This was what traditional legend tells us and it was perhaps the fact that the first act set the scene for what promised to be a familiar story that seemed pedestrian and long drawn out. After the interval, however the play really goes with a bang; the ride has taken place: Godiva’s character has taken a subtle change: so has her sister Christina’s: and we are led to believe that it was she Tom saw in the altogether and not Godiva at all. This shocking revelation puts new romance into Christina’s hitherto platonic marriage, but only as the final curtain falls do we discover he true identity of that legendary streaker.

It was all good stuff, well handled by the Players after a slow beginning. Congratulations to Peter Monger on reaching his twenty-fifth year of sterling service to the Compton Players. As ever he looked the part as Lord Leofric, handled his lines competently and I believe I detected a little more relaxation than usual in his movements and gestures. Perhaps this augers well for the next twenty five years! Liz Saxton was an obvious choice for the part of Lady Godiva and it is always a pleasure to see her sheer professionalism. Carolyn Williams was perhaps a little mis-cast as Christina, a girl just turned seventeen, but despite this she excited all our sympathy as the frustrated bride who found happiness at last, and Eric Saxton, playing her husband Edgar, skilfully and amusingly wrought his own character change. Philip Seymour is new to me, although obviously not new to acting, and, if his sensitive portrayal of Peeping Tom is anything to go by, he is a welcome acquisition to the Players. Audibility and clear diction are always important but I fear Jill Collier, as Godiva’s mother, overdid this to the extent of slowing down the action. She did however look and move in a suitably stately manner. Mary Herring is always good but once again she found herself below stairs. Perhaps one day she will be allowed to work her way up in the world? Katherine Jones showed a wealth of comedy as Old Moll the soothsayer whose dream initiates the famous ride and the vision scene in which she foretells the Nazi bombing raids on Coventry was highly moving. Mike Yates’ brilliant lighting and Royce Treacher’s effective sound added greatly to this scene.

All in all I found this probably the best balanced cast in my experience of the Compton Players, well dressed, well made up and outstandingly directed by Eric Saxton. His set was as usual so realistic that I found myself wondering how many lorries would be needed to carry the rubble away when it was finally struck!In a shortened version of this review, the following line was added at the end:

‘It is pleasing to hear that they have been offered the premiere of another of Miss Reid’s plays.’