Close to Croydon
Hugo, a PR consultant on his way to an important meeting. and Martha, a Museum Education Officer with a case full of liberty bodices, are trapped in an overturned railway carriage following a rail crash, waiting tensely to be rescued. A touching relationship begins to develop between them, but they are torn apart by tragedy.

Bluey is the Colour
A visit by a council official to Mr Penrose’s time worn flat reveals much more than anyone expected. We all make mistakes in life. . . but given a second chance would you do the same again? Mr Penrose is faced with this dilemma when Miss Reynolds calls to investigate a complaint about his landlord, but she is confused by his attitude, and totally shocked by the stick wielding aggression of his neighbour, Mrs Hopgood. As this play unfolds it becomes clear that Bluey the budgie is not the only captive creature on show.

The Crimson Cocoanut
Jack Pincher has come to a decrepit restarant where two anarchists are expected to rendezvous. Scotland Yard has heard that a plan is afoot to blow up the bank Of England. Robert, the waiter is more concerned with wooing the cook, but agrees to help pincherfoil the anarchists. The would-be bombers are arrested, and Pincher and Robert share the reward.

Compton Players continued their Golden Jubilee year celebrations last week when they performed a trio of one-act plays in the Coronation Hall at Compton.

They began with Close to Croydon by Gillain Plowman which was their entry for the Wallingford Drama Festival this summer. The play is set in an upturned railway carriage following a rail crash where Hugo (Mike Long) and Martha (Enid Farr) wait tensely to be rescued. As might be expected these two experienced players gave a polished performance as they developed the relationship between the characters. There was plenty of work for the stage hands as the large railway carriage set was removed but the setting was perfectly stark for the premiere of H Connolly’s latest play Bluey is the Colour.

Unlike some of his other plays, which have had audiences rocking with laughter, this was a deeper, more thought-provoking piece where a council official (Rebecca Jones) visits a block of flats to investigate a complaint and discovers that all is not as it seems. It took some time for the audience to realise that Mr Penrose (Paul Shave), his ex-wife Mrs Hopgood (Liz Saxton) and Bluey the budgie had actually returned from the dead. Liz Saxton was well cast in the strong character of Mrs Hopgood and there were some very funny moments. Rebecca Jones did well to sustain the balance between near-hysterical laughter and fear of the unpredictable and often menacing Mr Penrose.

The last play, The Crimson Cocoanut by Ian Hay, provided an opportunity for some of the newer members of the players to make their debuts. In a seedy restaurant in 1913, detective Jack Pincher (Scott Hulme) waits to apprehend the anarchist Nitro Gliserinski (Nick Roberts) and his wife (Mary Warrington) who are about to plant a bomb in the Bank of England. The plot is complicated by the presence of Mr Jabstick (Peter Whitworth), and his daughter (Rebecca Warrington) who is in love with the detective.

Ben Langley made an excellent debut as the waiter, who held long conversations with his unseen ladyfriend the cook, and who finally defused the situation.

Although the play was sheer farce and it had its funny moments, the timing was not sharp enough to make it really work and the set lacked the players’ customary attention to detail. 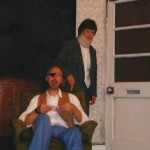 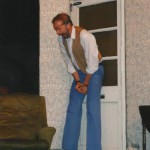 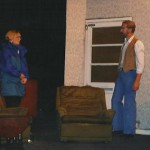 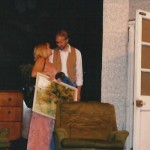 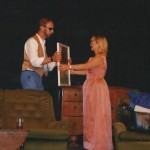 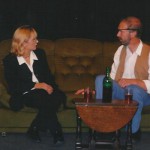 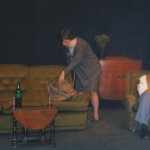 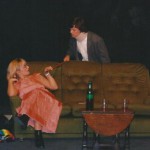 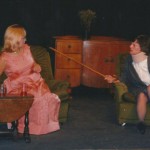 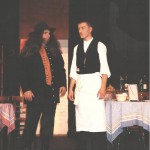 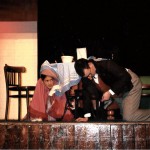 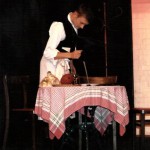 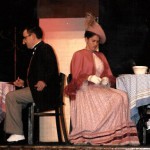 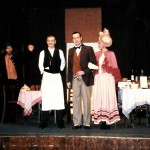 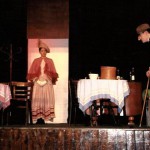