The events of one weekend as seen from the dining room in this the ‘dining room’ play from Alan Ayckbourn’s Norman Conquests, in which Reg finds food rather scarce despite having it thrown at him by Sarah… Sarah is scandalised by Annie… Annie is disappointed by men in general and Tom in particular… Tom knocks down Norman… Norman’s romantic proposals are ruined thanks to Ruth… Ruth loses her patience, her temper and her glasses… and in which everyone has trouble deciding where to sit…

Compton Players’ production of Alan Ayckbourn’s Table Manners was played to a high standard by a well-balanced cast; their delivery was good, and the pace was well maintained. This play does not contain the many belly-laughs of other comedies, but there is a rich vein of humour which was well exploited by producer Marianne Smith and her players.

The action takes place in the dining room of a Victorian vicarage-type house. Sarah and Reg arrive to relieve Annie from her hum-drum existence looking after their bed-ridden mother. Annie is off for a dirty weekend in East Grinstead, that is until Sarah finds out that their brother-in-law Norman is Annie’s partner, and stops the whole thing. The result is an hilarious dinner party that turns to disaster.

As the put-upon Annie, Brenda Prior got inside her role well, and she reacted well with the other characters. Elizabeth Saxton’s portrayal of Sarah was formidable and highly entertaining, whilst Nick Roberts’ more gentle but humorous playing of Reg was an effective contrast. As the impossible Norman, Dave Hawkins made a very good job of a role which is very difficult to play, and as his wife Ruth, Mary Warrington showed considerable style and skill in the handling of her part. Finally a mention for H Connolly for his very amusing portrayal of the vet.

The set and dressing were not of the quality I would expect from Compton Players. However, this did not mar the enjoyment of the performances of the actors, which were enthusiastically received by capacity audiences.

This was a pleasing production, well cast, astutely produced by Marianne Smith, and with some fine performances from the cast of six.

Sensible Annie lives with her bedridden mother in a decrepid country house. Tom, the local vet is too gormless to see the green light in Annie’s eyes so, in desperation, she agrees to go to East Grinstead with Norman (her brother-in-law), for a “dirty weekend!”

Reg, (Annie’s brother), and Sarah turn up for the weekend and ruin Norman’s plan. Norman’s wife Ruth arrives to collect her errant spouse and is caught up in the ensuing turmoil which culminates in a disastrous but funny “nice quiet, civilised evening!”

There were many funny moments in this production, the lions share going to Elizabeth Saxton as Sarah. Bordering on hysteria for most of the time, she made the most of her witty lines with a rapid but clear delivery, especially in the place setting episode in Act One.

This variation on musical chairs greatly amused the audience.

H Connolly’s rustic vet grew more gormless as the action progressed, a nice performance. Dave Hawkins gave a fine performance as Norman, (“Norman De-whurst, assistant librarian and gigolo”) with a chirpy study of this smooth womaniser who always got his girl, if sometimes by default!

Dave Hawkins’* dry sarcastic delivery was just right for his portrayal of Reg and Mary Warrington’s Ruth Excellent as the “understanding” wife. Brenda Prior’s Annie lacked a little at times but came good when the occasion demanded especially in the dinner scene when referring to the amorphous dish she had concocted as “oxtail soup with unidentified lumps!”
This was excellent entertainment from the Compton Players.

*This should read Nick Roberts. 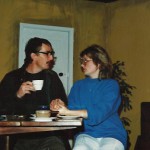 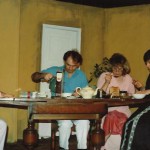 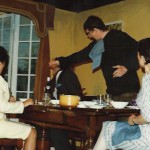 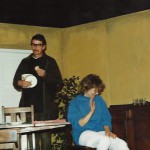 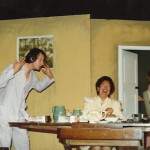 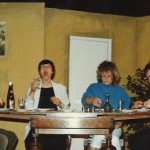 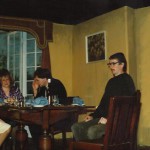 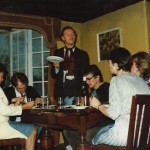 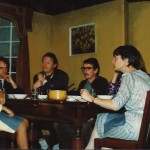