by J B Priestley

“Telling the truth is about as healthy as skidding round a corner at sixty… and life’s got a lot of dangerous corners, hasn’t it?”

An after-dinner discussion about the merits of telling the truth opens a veritable Pandora’s Box of secrets. As facts emerge about the apparent suicide of a family member the truth becomes firstly uncomfortable and then destructive as each character reveals things about themselves that shock and dismay the others. Did the brother commit suicide or could one of the company be responsible for his death?

This intriguing ‘rollercoaster ride’ has a surprising and totally unexpected ending.

There is a frisson of excitement as the house is plunged into darkness. The curtains swish open. In the darkness a shot is heard and a scream. The stage lights gradually come on to reveal a group of elegant women in glamorous dresses, their hair curled and neat. The scene is inside a country cottage with leather books on the shelves. There is a big radio but no television. The ladies have just listened to the end of a play.

“How much truth can we take in our private lives?” This is the theme around which the Compton Players polished production revolves. The perennial issues: love, marriage, drugs. The burning question: did Robert’s brother Martin really shoot himself? The thriller format is more Agatha Christie than Inspector Morse. It covers an evening in the lives of the partners in a family firm, their wives, a visiting novelist and the pivotal Olwyn.

Olwyn broods through two acts, the tension mounts as we wait for her declaration: “I shot Martin!” Naomi Road plays her part with careful timing, pouring out her story convincingly. Things do not end there. The stalwart Freda confesses her love for the dead Martin. More surprisingly, so does her brother, Gordon. Both characters, played by Cathy Leatham and Peter Watt, develop from polite reserve to passion. Their spouses are played by Mark Bailey and Hannah Belton: Robert, the injured husband, young Betty who throws a grand tantrum when she learns that Charles Stanton (Shane Lambourne) is in love with Olwyn. Liz Saxton’s caustic Miss Mockridge provides an anchor. While she is on stage appearances have to be kept up.

The seven-strong cast delivered their lines with clarity and conviction. They had us hanging on their words as tension after tension built up and resolved. Producer Eric Saxton achieved his stated aim to bring Priestley’s first play to life. The curtain closed on a repeat of the gunshot, the opening scene and a snatch of Happy Days Are Here Again! We went home thinking: “Much better than the telly!” 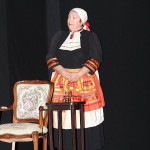 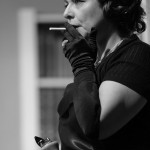 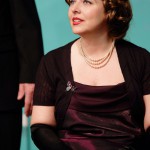 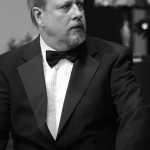 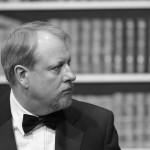 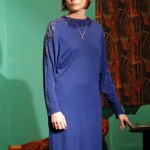 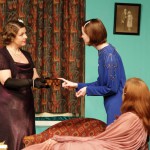 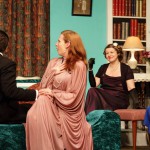 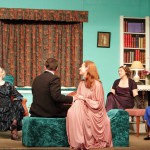 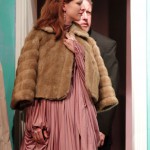 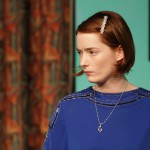 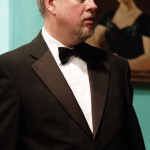 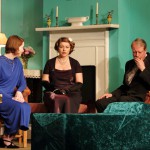 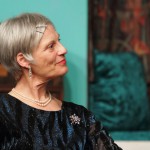 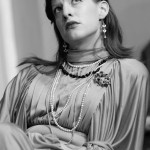 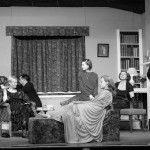