When a car crash causes Jill and Stephen to suffer concussion and begin to share the same medieval dream, the consequences for the romantic relationships between sisters and their respective partners is dramatic but not entirely unwelcome. 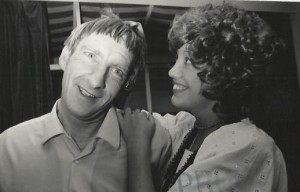 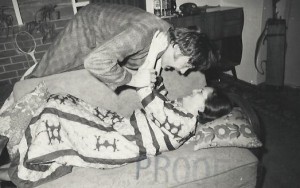 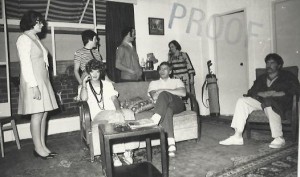 In Kenneth Horne’s well-constructed play Sleeping Partnership, presented to full houses at Compton’s Coronation Hall last week by Compton Players, theories of reincarnation, telepathy and even a time-slip (“a crease in the cosmos”) were all put forward to explain the mysterious phenomenon of a dream dreamt simultaneously by two people.

The two dreamers, Jill and her sister’s fiancé, Stephen, played by Carolyn Williams and Eric Saxton, had been involved in a driving accident and were temporarily concussed, while on holiday. When they recovered, each recounted a dream they had had – only to discover that they were dreaming two halves of the same dream, and what is more, the dream continued each time either went to sleep.

Jill’s sister Phyllis, who had already discovered that she had fallen in love with Jill’s fiancé Mark, was able to view the developing situation between the two dreamers, as they related the dream of a mediaeval romance to the present-day reality, with detachment and even relief.

Tom Stephens as the father Julian, reacted at first, as anyone might, with boredom at being asked to listen to the story of someone else’s dream, but gradually as the significance of it dawned, the whole family became drawn into the story.

Even Violet Watkins, the glamorous little dolly-bird secretary (played by Mary Herring) with matrimonial designs on Dad, and an alarming number of stories about “Mumsie” had her counterpart in the mediaeval romance – although a neat twist in the story finally saved Julian from her clutches, while satisfactorily uniting the younger couples.

Sally Reid flew in and out as an over-hearty doctor, too much of a fellow-sufferer to be much comfort to her patients, and Peter Monger as Mark, looked as glum as he had reason to be, until he realised that Phyllis could make up for his loss of Jill.

This was a well-balanced, cheerful play, and if not of any great consequence, it was certainly entertaining, and well-produced by John Webster, although the fast pace of the first Act was perhaps not quite so well-maintained in the second Act.

The Players have been well-supported by their backstage group and will be sorry to lose their stage manager John Nash, when he leaves for Norwich. Their next production will be in April, possibly another comedy, but the choice has not yet been made.

A full house is rewarding for the players and audience alike, and it was encouraging to find that there was hardly an empty seat when the Compton Players performed Sleeping Partnership by Kenneth Horne in the Coronation Hall on 25th, 26th & 27th October. Given a good sized audience, a good cast and skilful production will earn just rewards on the night but, however high the standard, that audience needs a nudge to fill the seats. Great credit is therefore due to Pam Monger and her publicity for giving just the nudge required and filling the Hall so well these days.

I have had reservations about the recent choice of plays but Sleeping Partnership pleased me greatly. The plot was unusual but never contrived. Julian Peabody has taken a holiday bungalow with his daughters Jill and Phyllis and their respective fiancés Mark Graham and Stephen Clench. Jill and Stephen suffer concussion in a road accident and when they regain consciousness they discover that they have been dreaming identical dreams of Saxon times which can be related to their present-day situation. Stranger still, the dreams continue in serial form when either goes to sleep. Disturbing as they seem at first, the dreams finally result in the satisfactory exchange of the respective partners and save father Julian from the matrimonial designs of his secretary.

As usual the acting was first rate. Eric Saxton’s light touch and sheer professionalism in the part of Stephen Clench was complemented by Peter Monger’s lifelike portrayal of his dull co-suitor Mark Graham. The Peabody sisters, played by Kate Jones and Carolyn Williams, were entirely convincing, while Tom Stephens as their father kept the comedy flowing. In the smaller parts Mary Herring made a glamorous and overpowering secretary and Sally Reid was suitably breathless as the doctor.

John Webster’s production was slick and kept the pace up throughout but I was a little disappointed with the set this time. The next production will be in April and full details will no doubt appear in a future Guide.