When Detective Superintendent Harry Baxter is called to an office building to investigate a murder, he is surprised to find at the scene Mrs Piper, a friend from way back, as the principle witness. Unfortunately Mrs. Pipers is a bit of a busybody always trying to help with suggestions, lines of enquiry, and theories. Worse – knowing him from so long ago, she is a bit over familiar and doesn’t treat him with the respect he feels he now deserves. Now he has to solve a complicated murder mystery with several equally likely suspects…

Bodies (presumed to have been murdered), clues, evidence, and suspects, disappeared in turn during the hilarious events of Jack Popplewell’s comedy-thriller Busybody presented by the Compton Players last week. Eric Saxton was the producer, and this was the fourth play that he has produced at Compton.

The cast tackled the play with zest and confidence and a high degree of teamwork which resulted in a very slick performance, which was greatly appreciated by the audience, small though this was o the first night. Bookings were expected to be better on subsequent evenings.

By far the largest parts in the play are those of Lily Piper (the “busybody” of the title) and Superintendent Baxter, and in these two roles, Molly Gray and John Webster were excellent. Whether bursting with information, reminiscing over the earlier days of their acquaintance or uttering aside comments with a dead-pan expression, Molly Gray made every line tell, and kept the audience rocking with mirth.

John Webster as the Superintendent became almost apoplectic in his endeavour to control his quite justifiable exasperation. Louise Stanlake gave a chilling impression of an efficient private secretary while Mary Herring was an attractive office junior, successfully trying to catch the eye of the detective-constable played by Roger Gary. Peter Monger played the debonair Robert Westerby, Jean Adlem was the extremely well-dressed wife of businessman Richard marshall, played by Steve Cheeseman, in whose office the action of the play takes place.

In common with other village dramatic societies in this district, Compton Players have a very high standard of set design and construction, and the office in this case was a very modern one, with strip pine panelling, venetian blinds, modern paintings and floral decoration. A neat touch too were the holiday postcards pinned over the secretary’s desk!

The set was made by Bill Evans and members of the company. Not only did doors fit properly and open and shut at the right time but a door handle and curtain which had to come off, only did so at the appropriate time. Lighting was well synchronised, and in the final rather dramatic scene, the chase round the office was very neatly staged.

A “whodunit” is always a good choice for a village play and Jack Popplewell’s comedy-thriller, Busybody, performed by the Compton Players in the Coronation Hall on April 27th, 28th & 29th, obviously amused and intrigued its enthusiastic audience.: the Compton Players is a competent group, they select good plays and publicise their productions thoroughly but, even so, I never feel they get quite the support they deserve.

Those of us who did make the effort to go to see Busybody were well rewarded. The plot is predictably unpredictable: Lily Piper, the voluble office char, discovers a body. When the police arrive the body has vanished but, before long, the supposed corpse turns up alive and well. Another body is found, the chief suspect disappears and, in the end, after many comings and goings, the person we least suspect turns out to be the killer.

Molly Gray stole the show as Lily Piper. This exacting part hardly allows her a moment of stage, but it certainly offers great rewards. Molly seized her opportunities and kept her audience laughing throughout the play. John Webster made a big impression on me in a previous production. His cold-plagued Superintendent Baxter confirmed a happy ability as a natural comedian. Roger Gray was competent as the Detective-Constable, albeit a little inclined to overplay, while Steve Cheeseman, assisted perhaps by a patently false moustache, got everything possible out of the unrewarding roll of the high-powered businessman. Jean Adlem, playing his unfaithful wife, could perhaps have relaxed and used more variation in voice and gesture, but she looked the part. Louise Stanlake portrayed the frustrated secretary to perfection and Peter Monger, in a small part for a change, was so pleasant as the murderer that I for one could not have been more surprised at the denouement. It was nice to see Mary Herring on stage again in a good little part as the belle of the typing pool: she acts well and has a natural stage presence.

Eric Saxton has a wealth of experience both on stage and behind the scenes. His production showed this only too well. The moves were well planned, the “business” professional, and the whole play went off with great pace and rattle.

The set of Bill Evans and Mike Yates was better than ever. I cannot remember seeing Venetian blinds and wood-grain panelling used to greater effect I the Coronation hall before.
I note that the Compton Players’ next production will be staged in the Autumn. I will certainly be there and I hope many more will also give the “telly” a miss for one night and enjoy for a change a breath of the real theatre. 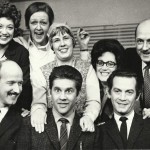 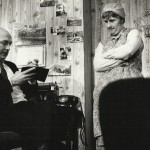 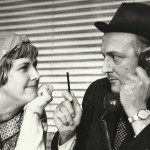