Roger is having trouble getting a team together for the afternoon’s fixture against the British Railways Maintenance Division Yeading East but this proves to be the least of anyones worries. Bob is having marriage trouble as he is still doing odd jobs for his ex-wife behind his current wife Ginnie’s back.

Dennis is also having marital trouble as his wife seems intent on moving house despite the fact they only moved recently. Kevin is trying to fight off his over-affectionate wife Maggie while at the same time nurse his injured spinning finger and Alex’s new girlfriend ends up shutting herself in the toilets having hysterics.

Even Roger’s seemingly perfect marriage to Miriam hits the skids when she discovers he was playing away from home in more ways than one on a trip to Dorking last year. Just when it seems things can’t get any worse for them, it starts to rain.

Compton Players’ excellent production of Outside Edge was enormously enjoyed by the audience at the Coronation Hall, Compton last week. All the drama and comedy of this play set in and around a cricket pavilion were engagingly brought to life by a talented and extremely well balanced cast.

Eric Saxton’s production of this deservedly popular play by Richard Harris, was pacey and satisfying, and the larger than life — though recognisable — characters were confidently portrayed and well acted.

Elizabeth Saxton (Miriam) was exceptionally good as the fussy ‘put-upon’ wife of the cricket captain. Her creation of this role was a joy to watch. As the captain, Peter Monger (Roger) complemented her well, though in parts he lacked her strength. Charles East as Bob, the man swinging between his former and present wife, was convincing, and played the different facets of his role very well. Mike Long (Dennis) brought out the pathetic side of his character amusingly, and Mary Warrington as Maggie certainly was ‘well built.’ Her comedy and timing were commendable. Little Kevin was played with charm and a sense of fun by Nick Roberts, and bitchy Ginnie was given the full treatment by Enid Farr. Ian Hickling (Alex) depicted the smoothy solicitor with pompous ease, and Jackie Heitzman (Sharon) was every bit the dolly bird, although her voice was a touch on the light side.

The play has a lot of action and a considerable amount of ‘business’ and this was all handled smoothly by the well rehearsed cast. There were some nice touches – the smoke drifting over the fence when poor old Dennis’s car is set on fire by his wife! The sound effects in the cricket match itself were good to start with, but they lost their impact a little as the act progressed. The set was ingeniously condensed to fit the small stage, and was interesting. The lack of space did inhibit some of the action, but any problems were coped with in a professional style that was a hallmark of the whole production, and that was a credit to Compton Players. Howzat! 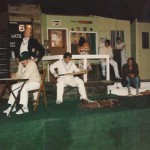 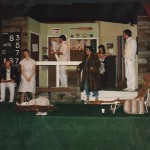 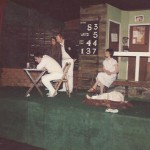 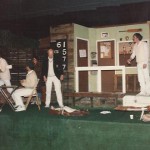 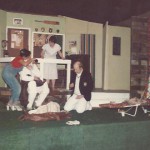 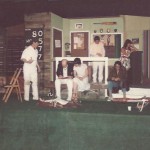 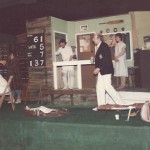 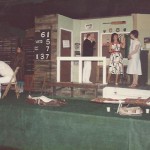 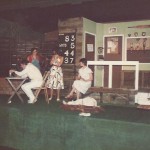