Richard’s is a wartime story of murder, lust for power and an evil determination to become King. Our production follows him on his journey to the crown through murderous plots and traitorous relationships leaving the audience to ponder the question – was Richard really a villain, or a victim of his own deformity?

With a nod to the mystery writing of the time, we’ve set this slick and at times brutal and poignant production in 1939; you can expect period costumes, a striking set and a real treat to celebrate 70 years and over 130 productions from The Compton Players!

Richard III by William Shakespeare: Richard was chosen by Compton Players to celebrate their Platinum (70th) anniversary and this was an immense challenge. It tells us how Richard will stop at nothing to secure his place on the throne, the dastardly deeds he stoops to and what he does to achieve it and how it eventually brings about his downfall. It’s a bold and fierce retelling of the famous story of jealousy, manipulation and deceit. Set at the height of Agatha Christie’s popularity – coinciding with the 70th anniversary of the group – even though there is no mystery, this interpretation parallels the murder and intrigue of Agatha Christie’s stories.

Front of House: The hall was laid out in the round as well as using the hall’s stage. The front of house team was welcoming and helpful showing patrons to their seats and ensuring the evening ran smoothly.

Scenery/Set/Properties: The set was excellent and had been well crafted portraying Richard’s room and various other locations using the floor area. There was great attention to detail.

Costume/Hair/Make Up: A great deal of trouble had gone into ensuring each character was appropriately dressed and made up immaculately. The costumes were particularly impressive.

Lighting, sound and special effects: The lighting was effective and imaginative; the combination of lighting and sound for the “ghostly” and Battle of Bosworth scene was particularly well executed.

The Production: The essential characterisations of each cast member was well developed and each character maintained their persona throughout. Peter Watt as Richard gave a compelling performance and there was fine work from Dave Hawkins as Buckingham. The ferocious exchange between Liz Saxton (as Queen Margaret) and Mary Warrington (as the Duchess of York) was highly charged and mesmerising. Thanks to the talented and hard working team, led by Director, Helen Saxton, the group gave us an intelligent, insightful and enthralling depiction of this famous story and the audience enjoyed an entertaining evening of classic theatre.

Chosen for their platinum jubilee production, Compton Players were brave to tackle Shakespeare’s long history play, sometimes categorised as one of his tragedies. It is director Helen Saxton’s favourite play and she did well to present it in the round. The action flowed continuously and the actors, for the most part, knew and delivered their lines naturally.

To dispose of the negatives first, I felt some of the atmosphere and sense of place and time was lost by setting it in 1930s costume. In mitigation, it could be argued that by updating the setting we could make comparisons between the scheming, ruthless Richard, Duke of Gloucester, and his supporters, and the behaviour of modern day politicians.

I did, however, have difficulty with that aspect and found it virtually impossible to come to terms with the toady Sir William Catesby when he was presented as a prim, stiff and secretarial woman in a cream skirt. However, Naomi Read was suitably sinister in the part and it wasn’t her fault she was cast in the wrong gender.

Lauren Eely, as Lady Anne (Neville, Prince Edward’s widow) gave a bold portrayal that would have been even better had she shown more passion, tears and raised voice when denouncing Richard as her husband’s killer. The same could be said about Tracey Pearce as Queen Elizabeth who, like Liz Saxton as Queen Margaret, showed pain and distress at their losses, but might have conveyed more venom and volume. However, all three were strong, sensitive actors in later scenes.

The male actors fared better here, but it was easier for them to portray the crafty, self-seeking dukes and lords with sly, intense acting that never required raised voices.

Paul Shave as Lord Stanley and Robin Hawkins as both Richmond and Edward IV were impressive in their studied portrayals. Eric Saxton, Ann Griffiths, George Buckland, Brenda Prior, H Connolly and Nick Roberts were all quietly effective and, indeed, so were all the supporting cast.

As to that complex character King Richard III, Peter Watt gave a very fine performance in a long and difficult part, conveying the man’s slimy, ruthless ambition and determined bullying to splendid effect – in one scene, bellowing out “thou troublest me” to an unfortunate subordinate in a voice that shook the walls.

The speeches were well-delivered and the asides to the audience very well thought-out and executed and, with very minor reservations, all contributed to a smooth, well-acted and skilfully-directed performance.

The Compton Players made October a month to remember. They gave us their Platinum Jubilee Celebration production of Richard III… and how.

The play was given a new slant. It was set in 1939 although for some the costumes neither enhanced nor detracted from the bloody story. The acting and deliveries were powerful and absorbing. As was the tale which I suspect many of us only knew in part.
Richard III was king then. But in this performance Pete Watt was king. He had us all entranced and gripped, at times staring close up and personal into the eyes of his hypnotised audience. Well done and thank you Pete. (Well done too to the makeup team. Pete’s hunched back, withered arm and still leg were strangely prominent… and yet there was almost nothing there! Of course, Pete’s acting made them so integral.)

Dave Hawkins must have given the performance of his life. Certainly, it was the epitome of his acting career as far as I have experienced. His Duke of Buckingham strutted and suffered with real panache. Tip top job in my view.

Terrifying- That’s what Liz Saxton’s Queen Margaret was… and some. Eerie, gripping and scary. Liz might be ubiquitous in Player performances but is never ever remotely the same. (Perhaps what we saw was the real Mrs Saxton? Only Eric knows!)

The Compton Players wanted to celebrate their 70th anniversary with a spectacular production. Well they did just that. Thank you, every one of you.

Compton Players celebrated their Platinum Jubilee with an engaging production of Shakespeare’s Richard III. The efforts of the entire cast and crew came together to make this a very special production, from the well thought-out staging and effects, to the historical detail of the programme. A long-time ambition for director Helen Saxton, she absolutely fulfilled her aim of bringing out the many different sides of such a well known historical villain and creating an enjoyable, entertaining and thought provoking play.Peter Watt relished the role of Richard III, portraying his scheming and cruelty with glee. It was a mesmerizing performance, made richer by setting the action in the middle of the hall, where Richard could engage with audience members and draw them into the story. The direction and use of lighting and sound came into its own during the ghostly scenes preceding the battle, and the battle itself, which was skilfully thought through to bring drama without bustle and chaos. The classic lines from Richard III can sometimes be a bit of a cliché, but in this production they were delivered with great drama and effect, as much a product of the actors as the staging.

Other notable performances included Robin Hawkins, playing two quite opposite roles very well, from the ailing King Edward IV to eventually victorious Earl of Richmond. Liz Saxton gave menace and foreboding to the role of Queen Margaret, her warnings and prophecies echoing around the room, and Dave Hawkins as Buckingham found his comeuppance as he schemed alongside Richard III to take the throne. It was a great portrayal of the character, from his initial deviousness to his ghostly despair.

There was also a fantastic cast of young people bringing the children’s roles to life, including Ava Pearce, Elliot Jones, Alfred Morris, Cameron Pearce and Archie Saxton. They all did brilliantly, and it looks like they will ensure the future of the Compton Players for the next 70 years as well! 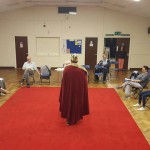 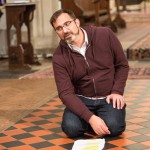 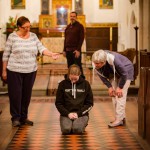 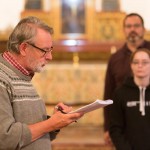 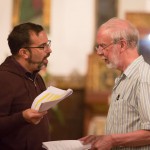 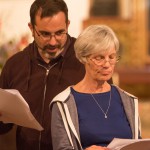 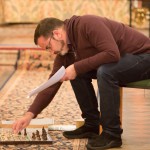 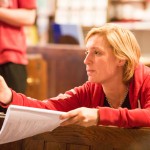 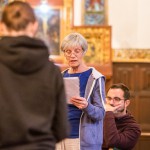