Chester Dreadnought and his wife, Patricia, arrive at the ancestral home of Lord and Lady Elrood hoping for a quiet weekend, little suspecting that two villains, his old enemies Capone and Wedgewood , are hot on his trail. War crazy Lord Elrood lurks in the flowerbed with his shotgun ready to repel attacks by the butcher’s boy, the postman and other desperate characters.

Through the ancestral living-room wander Maggie and Bert, come for a two-an-sixpence worth of gawp and are suitably awestruck by the goings-on of the country house set. Add a man-mad maid, vague Lady Elrood, an eccentric guide, and a scout master and you have a mad, hilarious and funny play.

Derek Benfield’s Post Horn Gallop proved an admirable vehicle for the Compton Players last week, where the hectic happenings in the baronial hall of Elrood Castle were hilariously brought to life.

The unlikely bunch of characters were played enthusiastically and with that sense of fun vital to a comedy such as this.

The need to open the castle to the public in order to save the flagging fortunes of the family, and the subsequent invasion, provides the basic plot, though it isn’t nearly as simple as that; well, it couldn’t be could it? There was the batty guide, and the two gangsters seeking revenge on the Elrood’s son-in-law, Chester, not to mention Lord Elrood himself, taking pot-shots at all and sundry with his shotgun. In the latter role Peter Monger gave a nice touch of eccentricity, though he could have played ‘out front’ more.

Marjorie Treacher (Lady Elrood) gave a polished performance of someone trying to keep her head whilst all about her were losing theirs. As Ada, Elizabeth Saxton was able to show what an excellent actress she is. Her facial expression and timing made sure she got everything out of her part. Charles East in the difficult role of Chester is also worthy of special mention. His sense of comedy and manner made him ideal for the part.

Catherine Heitzman (Miss Partridge) created a lovely character and all credit to her for a convincing portrayal of a role perhaps intended for an older actress. Bert and Maggie, the two ‘ordinary’ folk were charmingly played by H Connolly and Brenda Prior, They supplied plenty of laughs, and the ‘tea’ scene was hilarious. Kristi Warwick had the unenviable task of playing the straight role, but she coped well and made a good foil for the others. As the gangsters Ian Hickling and Mike Long proved both menacing and funny, and Nick Roberts got some good laughs as the scout.

With her debut as producer, Enid Farr must be thrilled. The fast-moving action, and the attention to timing was most pleasing. Eric Saxton’s set gave an amazing feeling of space, and the three-dimensional features were attractive as well as making the set look substantial. The action was set in the 1960’s, however the costumes seemed too modern for that period: but this really didn’t matter, the audience enjoyed every minute of it, as indeed did I, and it seemed an ideal choice for both actors and patrons.

Several “firsts” were marked by last week’s production from the Compton Players, a farce by Derek Benfield called Post Horn Gallop. The play, which ran for three nights, was Mrs Enid Farr’s first production with the company in her four years as a member. Her husband Alec Farr was putting in his first stint as stage manager, and Brenda prior as Maggie was taking her first role on stage.

The play was chosen by the group because reading it proved so enjoyable and because it seemed an ideal piece of family entertainment. It had been in rehearsal since the end of February, and the impressive set was mainly the work of Eric Saxton.

The plot centres on a castle just opened to the public by Lady Elrood. Her husband still thinks he is fighting in the war, and stands by the flower beds to repel such staunch invaders as the baker and postman. Into this comes Chester Dreadnought, their son-in-law (played by Charles East), who is trying to evade two men he saw rob a bank. They are after him for a photograph of the crime, and also have their eyes on a painting in the castle. Maggie and Bert as two visitors are awestruck at the “inmates” and the whole thing is done in traditional farce style. 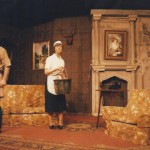 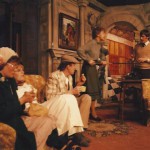 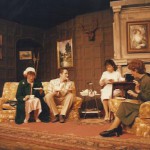 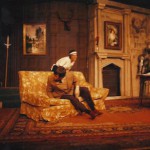