Mortimer Brewster, a drama critic, has just got married and is about to go on his honeymoon when he discovers insanity runs in his family. His sweet maiden aunts poison lonely old men and have a number of corpses buried in the cellar…

Strictly speaking, I suppose it does not do for a critic to be discovered cheering at the end of a performance that is to be the subject of a review – it does rather pre-empt the review! But why shouldn’t the cast know at the time how much their efforts have been appreciated? I found myself cheering on Friday, along with a large section of the audience at Compton Players’ presentation of Arsenic and Old Lace.

It was some years since I had last seen it and I had wondered if it would live up to my recollection of it. It is a superbly constructed play and so beautifully sustains both suspense and comedy (right up to what must surely be one of the best punch-lines ever) that I found myself enjoying it even better this time.

The penguin dictionary of Theatre describes it as “the classic horror comedy” with two highly respected ladies committing mass murders – “just one of our charities” says one of them! Their totally matter-of-fact approach to the murder and disposal of their victims is partly the basis of the comedy.

In this production the almost telepathic teamwork between Elizabeth Saxton and Marjorie Treacher as the two old ladies was magnificent… every look and every gesture were just right. I could have wished Elizabeth Saxton’s wig to have been a little whiter – she looked a shade too young for the role – but this is no reflection on her acting.

Peter Monger was punctiliously correct as Teddy Brewster, the old ladies nephew who thought himself to be President Roosevelt, but who was nevertheless single –handedly engaged in digging the Panama Canal in the cellar –an activity which proved singularly useful when it came to disposing of the so-called “yellow-fever” victims above-stairs.

Normality was represented very convincingly, by Eric Saxton, as nephew Mortimer, in love with the engagingly normal girl-next-door played by Vivienne Kendall, a newcomer to Compton Players. It was Mortimer to whom there fell the responsibility of preventing his aunts from continuing their macabre “charity work,” but before he could do so real menace came into their lives with the return of the third nephew, Jonathan, and his friend “Dr Einstein.”

Rob Bell’s slow deliberate movements, his quiet thoughtful manner of speech emphasised Jonathan’s sinister appearance, and with a running commentary of his past misdeeds supplied by the obviously terrified Dr Einstein (Nick Roberts) they produced some very suspenseful moments.

Four local policemen visit the old ladies during the course of the play and it was eventually the unobservant but loquacious Officer O’Hara (played with considerable relish by Royce Treacher) who saved the day by literally boring Jonathan and his friend to sleep when they were in the very act of attempting to murder Mortimer.

The play is set in America in the 1940s and the entire cast successfully sustained American accents without overdoing them. There were one or two moments when the pace unaccountably slowed, but these were momentary and never concerned the principals in this play. This was John Sanford’s first production for Compton Players and he also took a small role in fact, that of the old ladies’ final victim. What a way to treat the producer.

Arsenic and Old Lace drew capacity audiences on every one of the three nights it was performed and the finances of the new Social Hut will benefit accordingly. 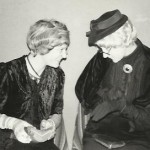