Heracles and Theseus, two celebrated heroes, arrive at the Amazons’ capital of Themiscyra expecting to battle with the warrior women for possession of their ‘Crown Jewels’. a belt belonging to their Queen. However, by clever use of a less well-known mythological name for the Amazon Queen, Benn Levy has created two, Antiope and Hippolyte, to confront and confound the heroes. To add to the confusion Zeus, the ‘Top God’ and Hera, his wife, add their comments and opinion to the happening and (if they do not approve) change the course of fate; Zeus in favour of the heroes and Hera (a founder of Women’s Lib) in favour of the Amazons, with amusing conclusions.

For their 25th production the Compton Players presented The Rape of the Belt by Benn W Levy, at the Downs School.

Although the production was not to everybody’s taste it was well performed by the cast of nine talented players.

The story concerns the hilarious efforts of two men given the task of obtaining, by fair means or foul, a belt belonging to the two queens of a nation of women who keep men for one purpose only – in a stud farm. Under the influence of the gods Zeus and Hera the women decide to fight for their rights – with shattering results.

Peter Monger as Heracles and Roger Gray as Theseus were on stage almost all of the time and gave very amusing and at times “violent” portrayal of the two strangers looking for the belt.
The change of personality as the goddess Hera took over the body of Hippolyte and she became a female warrior instead of a quiet rather lazy queen was a challenge to any player and Molly Gray was excellent in the part.

The casting was extremely well done, particularly that of Eric and Elizabeth Saxton as the gods Zeus and Hera respectively.

Katherine Jones, Pauline Richards and Letty Frith completed the cast* and their performances upheld the high standard that the audience has come to expect from this group of players. Production was by Eric Saxton.

*The reviewer completely forgot to mention the other leading lady, Margaret Watson as Antiope. 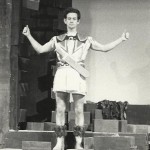 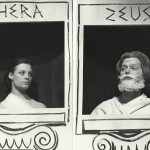 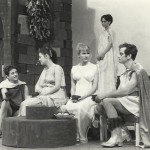 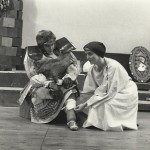