Danny has already murdered one woman, and there is little doubt that he will soon murder another — the aged owner of the house. He gradually insinuates himself into her affections in a skilful manner, for Dan is a dashing young assassin, a completely self-centred psychopath with no feelings and a vast imagination, who is perpetually acting, for his own edification, the part of the murderer.

By courtesy of the producer, John Sanford, and the cast of Compton Players’ latest production, Night Must Fall, I attended the dress rehearsal on Wednesday, as I was unable to attend any of the performances.

It is quite a different experience. For one thing, I have never been more comfortably seated at a play – or had more elbow room. The producer and I were given two comfortable arm chairs in the middle of the otherwise almost empty hall. In this spine-chilling play, voices echoed eerily in the hall without its audience, and when someone crept up to ask if I would like some coffee in the interval, I was so startled I really jumped.

The atmosphere of the isolated cottage in which the action takes place was nicely caught by the set, designed by Eric Saxton, and the costumes and hairstyles were all in keeping with the period of the play – 1935.

So much trouble had been taken to acquire the right things that Mary Warrington, who played the housekeeper, Mrs Terence, had phoned in a broadcast appeal to Radio Oxford for a suit of plus-fours for Hubert. Within minutes of being on air, she received several calls, one of which led to the Players being given a beautiful suit in excellent condition – and the right size too.

The principal characters in this very well-written play, by Emlyn Williams, are Mrs Bramson, the elderly semi-invalid who is so gullible that she falls for the superficial charm of a young con-man; Dan, the young man; Olivia Grayne, Mrs Bramson’s unmarried niece; and Hubert Laurie, Olivia’s would be suitor.

They were most ably portrayed by Elizabeth Saxton, Eric Saxton, Marjorie Treacher and Roger Gray. As Mrs Bramson, Elizabeth Saxton’s moods varied from the petulance of a spoilt old woman, to a cooing near-adoration when talking to Danny, who had ingratiated himself into her household.

Danny himself, the villain of the piece, was superbly acted by Eric Saxton, his Welsh accent never faltering and his moods changing subtly and in a most sinister manner. Olivia Grayne had completely seen through him and suspected him from their first encounter, but even so she could not help falling victim to his charm – a fatal charm for two of his victims and nearly so for her too. Marjorie Treacher was coolly in command of this role and Roger Gray played the rather bumbling and tedious Hubert. Others taking part were Janet Booth as Dora the unfortunate maidservant, Liz Wright as the nurse, Rob Bell as inspector Belsize and Peter Monger as the Lord Chief Justice.

Nick Roberts was stage manager, with Sue Roberts and David Baird as his assistants, and properties and costume were the special charge of Pauline Owen. It was good to see that the Players have youthful assistance backstage too, in the form of Kendra McMahon, Sally Quick, Elizabeth Musitano and Neil Weight. Adrian Treacher was prompt. For the performances, Julia Evans was in charge of front of house, and Pamela Monger has looked after the box office. 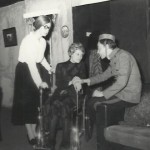 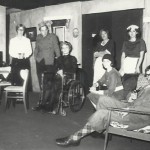