Brighton in the 1800s; Edward Strachen is cold and unfeeling towards his children. When his son takes up with a married woman who then tries to implicate him in the murder of her husband, Strachen realises the error of his ways.

Players do full justice to an excellent choice

Why did Roland Pertwee name his play Pink String and Sealing Wax? Mystified audiences at the Compton Players’ production last week began to understand when the curtains parted on a Victorian living room opening into a well-stocked dispensary full of medicaments of the period, and realised that a practising chemist of the late nineteenth century always sealed his packets with sealing wax and pink string.

It was an excellent choice of play – a strong story line, full of action and suspense, a large cast of well-drawn characters, good dialogue, lots of humour and that indefinable thing that can only be described as charm; a play to warm the heart, and the players did it full justice.

The story revolves around Edward Strachan, a pompous and seemingly hard-hearted father of a large family, a man too immersed in his own career as a chemist and public analyst to realise that his downtrodden wife and frustrated children have lost all trust in him – until his son gets involved with a woman of the streets and is unwittingly instrumental in providing the poison with which she kills her husband. He dare not turn to his parents for help but his three sisters do not let him down, even though Emily has to forfeit her hopes of a career as a singer and little Eva has to tell a timely fib in order to help convict the murderous Pearl Bond. And best of all, Papa sees the error of his ways and reveals his true affection for his family.

In the leading part Robertson Bell was thoroughly in command. He had the necessary ‘presence’ that is essential to the part. He never overplayed, and though frequently cold and crushing to his children and his wife, one never felt him to be worse than any other typical ‘pater familias’ of the period.

Marjorie Treacher’s portrayal of his sweet, worried but obedient wife was thoroughly believable. How one sympathised with her dismay when Edward ordered three gross of bloaters and she dared not complain! H Connolly was Albert, the son, and I liked his performance very much, as the gentle, sheltered youngster who finds out the perfidy of a woman who has ‘used’ him for her own ends. In this role Enid Farr surprised us all with her strong performance as a common painted slut – quite a change from her usual sophisticated roles.

The heroine of the play was Emily, the aspiring singer and the only one of the family to stand up to her father – a big part for newcomer Catherine Heitzman, which she tackled with considerable charm. Jackie Heitzman was her sister Jessie, and her big scene came at the end where she sobbingly reported how she saw Pearl jump off the pier and drown. Krista Warwick made a delightful little Eva. Her innocent comments were put across with nice precision and never failed to get a laugh. To complete the cast we had Mike Long as a fiery, outspoken doctor (lovely Irish accent!) and Charles East as a very understanding and irrepressible suitor for Emily’s hand.

This play is full of action, with endless comings and goings. Producer Elizabeth Saxton had her cast circulating neatly between the Victorian chairs and tables with admirable deftness, and all went smoothly up to the final, rather surprising curtain. It all goes to show that if you choose a really good play you can’t go far wrong.

Players pack them in

Extra chairs had to be found to seat all the members of the audience last week when The Compton Players performed Pink String and Sealing Wax.

The audience crowded into the Coronation Hall at Compton on three nights, with Friday and Saturday both selling-out.

The play, by Roland Pertwee, tells the story of a strict father (Robertson Bell) and his independent-minded children, and has a Victorian setting.

The main story involves the eldest son (H Connolly) falling for a local barmaid (Enid Farr), who is mistreated by her husband, poisons him, and then commits suicide.

In spite of the melodrama, the play includes plenty of humorous touches.

The play was produced by Elizabeth Saxton and is the second work she has produced for the Players. Catherine Heitzman and Kristi Warwick, who played two of the daughters, were making their first appearance with the Players, and H Connolly was returning to the group after a two year absence.

Mrs Saxton’s husband Eric, who was responsible for the set design, said that the Players had deliberately chosen a play which involved a number of young people in the cast. He added that although it followed a number of comedies performed by the group, it did achieve a different flavour and still attracted a larger audience.

The Compton Players now perform two productions each year, one in the spring and one in the autumn. The group’s first performance was back in 1947 with The Man from Toronto. 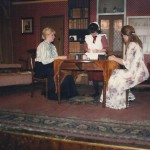 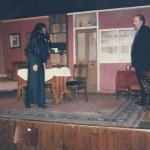 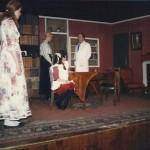 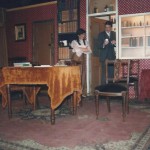 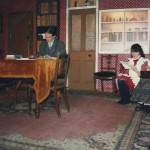 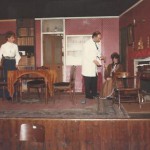 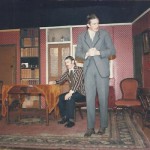 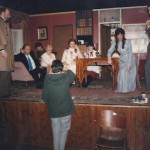 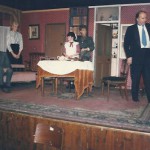 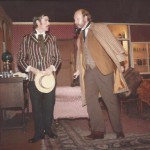 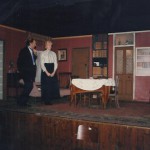 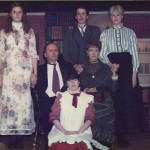