The ‘sitting room’ play from The Norman Conquests; the events of one weekend as seen from the Sitting Room. In which Reg is driven mad by Tom… Tom tells Annie a thing or two… Annie nearly comes to blows with Sarah… Sarah sees a different side of Norman… Norman sorts things out with Ruth… Ruth discovers the charms of a fireside rug… and in which nobody enjoys playing board games…

When Compton Players planned their autumn production last year, they feared they might have to change their chosen dates if “Jim went to the country.”

Well, he didn’t, as we all know, but he has chosen the week of their spring production instead! As a result, Comton Players will be presenting Alan Ayckbourn’s comedy Living Together on Wednesday, May 2 (instead of Thursday, May 3) and Friday and Saturday, May 4 and 5.

Liz Saxton will be tackling her first production with this play, although she has appeared in very many plays and is an excellent as well as experienced actress.

She has a good cast in Marjorie Treacher, Mary Warrington, Janet Booth, Peter Monger, Roger Gray and David Baird, and if this play comes up to the standard of their earlier Ayckbourn productions there will be some aching ribs afterwards.

No funnier on stage than on television

Compton Players’ choice of another Ayckbourn play Living Together attracted large numbers to see it, and as Eric Saxton commented on the first evening, “We’ve almost reached the magic figure of 300.”

Earlier productions of Ayckbourn plays have been hilarious and have left me with aching ribs, but, for me, this play was a doubtful starter. I had switched off a television production some time ago, and looked to the Compton Players to rehabilitate the play in my eyes. I’m afraid they didn’t succeed this time, and I feel that is the fault of the play, rather than the Players.

Humour is a very personal affair, and it may well be that other people have found this play very funny, but to me the situation was not, and the play lacked the brilliantly witty dialogue of other work by Ayckbourn.

There were some highlights of course, and some nicely controlled characterisations in this production by Elizabeth Saxton.

The air of shabby gentility pervaded the set – a Victorian vicarage-type house, where, unseen and unheard by the audience, lies the semi-invalid woman who is unwittingly the cause of a family gathering. For her daughter Annie who normally cares for her is to have the weekend off, and her brother Reg and his slightly acid wife Sarah, are to take over for the weekend. Annie, however, is not exactly going off for a rest. She plans an illicit weekend with her sister Ruth’s husband, Norman, and when she calls off this plan, there is little of gentility and a great deal that is shabby about subsequent events!

The characters which were best depicted were those of the gentle brother Reg, portrayed by Peter Monger, and, for my money, one of the best and funniest scenes was as his defence of his newly-invented board-game. Challenged that it was unrealistic, he proceeded to denounce chess as an unrealistic game, with horses galloping sideways, and bishops moving diagonally!

Marjorie Treacher as his wife, also gave a well-controlled performance, subtly suggesting a reason for her different attitude to Norman, which comes as a bombshell to Reg when he realises it himself at the close of the play.

David Baird invited sympathy as the stammering and unself-confident vet, Annie’s would-be fiancé, who was as unsuccessful at persuading a sick cat down from the top of a tree, as getting round to proposing to Annie. Janet Booth too came over as a real person in the character of Ruth, physically short-sighted, but realistic enough in her approach to life, and fully aware of her husband’s infidelities.

But Mary Warrington and Roger Gray both, I felt, lacked subtlety in their interpretation of Annie and Norman.

This is one of a trilogy, which I believe had great success in London, and which I would have expected to enjoy. As I said earlier, I had switched off a television production, so it could be that I am just not “on the beam” for this particular Ayckbourn. I hope others enjoyed it much more, and that the full houses for this play will be repeated at future Compton Player’s productions. 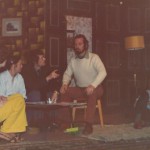