Anyone who watched Compton Players’ premiere production of Twelfth Man could be forgiven for comparing it with that Other cricketing comedy Outside Edge. Both are set in a cricket pavilion, and revolve around the events leading up to and during a cricket match.

Then it would be realised that here was no imitation of the Richard Harris masterpiece; this was a delightful comedy in its own right. Written by H Connolly, who deserves to be thrilled with his efforts, the characters emerged clearly, the situations were well contrived, and the humour and punch lines were particularly good.

The play was produced by H Connolly and Elizabeth Saxton and praise must go to their large cast who obviously enjoyed the piece and who handled the comedy skilfully, and brought the play to life. The action took place in Yorkshire, where Captain Len Hincliff, played in fine boorish style by Mike Long, struggled to keep his head when a team of lady cricketers arrived unexpectedly. Mary Warrington made a convincing Jean Hincliff (downtrodden but not defeated by Len). And Paul Shave gave a sensitive portrayal of Ray (member of the team and Jean’s lover!). Many more of the cast deserve a mention, but it was essentially a team effort, and there were few stars; I did however particularly enjoy Eric Saxton’s dry but humorous characterisation of Jack Digem, the undertaker.

The set was interesting, with a small balcony overlooking the field, and technically, the effects and lighting were slick. Having heaped praise on this production, I ought to say that one or two lines could be improved on, to improve flow and pace. The audience lapped it up on Friday night, I feel this play deserves more exposure; what about publishing it? It would look at home on any stage.

This was from Amateur Stage

One might have thought that after Outside Edge, there was no further fun to be wrung out of amateur cricket, but one would be wrong. The English national sport is a bottomless mine of humour. Twelfth Man by H Connolly gave unqualified pleasure to a responsive audience at Compton Village hall in April, and was of its kind a very commendable example; a play for us non-intellectuals, making instant appeal to the common man or woman, and bursting with humour, both broad and otherwise, from start to finish.It covers a Yorkshire cricket match where a gang of self-important local men suddenly find themselves matched – and outclassed – by a visiting ladies team. It includes two clandestine romances, a selfish, domineering captain whose past catches up with him, and the quickest change of character in any villain I ever saw. Yorkshire accents and Yorkshire prejudices abound.

Parts are extremely well distributed in a cast of six women and seven men. All have their chance to shine, especially the sour, double-dealing captain who hides a guilty secret, and in this part Mike Long gave a consistently good performance and remained obstinately unloveable until the last five minutes. It was nice to have four pretty girls and two glamorous mothers wisecracking away alongside the men, and there were some very funny lines. The plot developed smoothly and held our interest throughout, and if the denouement was a bit predictable, nobody minded.

The scene was the interior of the cricket pavilion and presented no problems to the set builders. Besides taking a small part (as an American who plays cricket as if on a baseball pitch), the author was co-producer with Elizabeth Saxton, and the resultant production was a lively, fast-moving romp which showed this enterprising village group at their best. 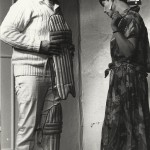 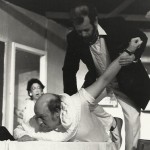 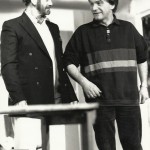 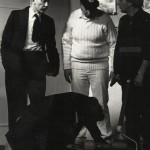 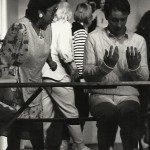 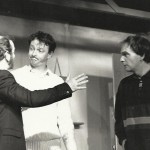 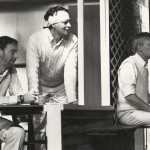 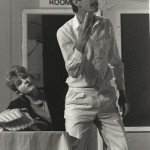