by H Connolly and Dave Hawkins

Our first ever pantomime from the pen of two of our members, Dave Hawkins and H Connolly. On their adventures Dick and his cat Lucky meet some interlopers from Cinderella, plenty of rats, a camel and a ‘thing’ in a bin!

Panto Fun for All

Every seat in the house was sold when Compton Players’ first-ever pantomime opened to the public recently. Staged at the Coronation Hall, Compton, it proved to have all the ingredients needed to make a good night out for the whole family.

The script was entirely home produced, being written by H Connolly and was loosely based on the story of Dick Whittington. It was the first time that one of his scripts had been performed in public and he managed to strike a skilful balance between adult jokes and traditional pantomime participation for the younger members of the audience. This resulted in a very successful show.

We have come to expect a high standard of entertainment from the Players, and despite the fact that they had six new members on stage, and that it was producer Dave Hawkins’ first major production, their performance was as polished as ever. They made excellent use of the limited space available and the only disappointment was the rather unimaginative set and an occasional lack of assurance in the delivery of some of the jokes.

The audience were somewhat bemused when the curtain opened to reveal Eric Saxton and Paul Shave dressed as the two ugly sisters berating Cinderella and chasing her cat Lucky. The show producer, Ian Hickling, soon put things straight, however, and sent them packing because they were in the wrong story. Thus Dick Whittington got under way.

Rustic Dick, from Compton of course, was played with bucolic charm by Charles East whose every entry was greeted by a roar of ‘Hello Dick’ from the audience.

Lucky the Cat, played by Helen Saxton was obviously the brains in the team and Helen did well in her first appearance on stage.

The appearance of the inscrutable camel, closely followed by its keeper, Mark Smith, armed with shovel and bucket, provided a means of persuading Julie Colwill and Emma Saxton to tread the boards and cause a great deal of hilarity in the audience.

Simple but effective costumes helped in the creation of the characters of the gangster rats, and the audience was soon hissing at Boss Rat (Mike Long) and his helpers Alcapong (Dave Stamp), Moll (Caroline Cook) and Bugsy (H Connolly), who in true Chicago gangster style aimed to take over London.

Another newcomer to the cast was Brian Bailey as the mean and ineffectual mayor of London, well supported by Peter Monger as his Chamberlain and Liz Saxton as his wife. Their daughter, Alice, played by Marianne Smith, set a determined eye on Dick from the start, though her enthusiasm to marry him was not entirely to his liking.

Dick and Lucky, chief ratcatchers succeeded in ridding London of its rats; but the ugly sisters, who had joined in the plot on the side of the rats, outwitted them with the help of a mysterious ‘thing’ in the dustbin, played by Jane Woodage, and clapped them in gaol.
A sparkling if absentminded Brenda Prior as the fairy godmother, yet another misplaced character from Cinderella, secured their release from the somnolent Jailer, Robertson Bell.
Marjorie Treacher was the deposed cook and Mary Warrington a very convincing witch.

Rats, a Camel and a Thing in a Bin!

A dancing camel, six foot rats and a “Thing” in a dustbin are all features of a pantomime being staged by the Compton Players at the Coronation Hall this week.

It is the first time the Players have staged a pantomime, and this week’s production was taylor-made by the group and includes local references and jokes.

It was written by H Connolly from an idea by producer David Hawkins, with additional material from the rest of the Players.

“We have never had anything that has sold as many tickets as this,” said Mr Hawkins, but he added that the pantomime might never have gone ahead. Work to instal emergency lighting in the hall, needed before it could be licensed for public performances, was finished only last week.

The theme for the pantomime is “Dick Whittington,” with Charlie East in the title role, and Helen Saxton as the “principal cat,” in her first appearance on stage with the Compton Players.

But the Players have freely “borrowed” from other sources as well, with a Sheikh, witches, a fairy godmother and Ugly Sisters.

One of the sisters is Players veteran Eric Saxton, who has played in everything from Shakespeare to farce, but never before as a pantomime dame. He also designed the set.

Julie Colwill and Emma Saxton are appearing on stage for the first time as the two ends of a dancing camel and so is Jane Woodage as the “Thing” in a dustbin (it’s a baddie, by the way).

Another newcomer is Mark Smith who, like many of the cast fills a number of roles, in his case including camel keeper, while Brian Bailey is the Mayor and the sheikh, and Dave Stamp is a rat called Alcapong.

Marianne Smith is the Mayor’s daughter, Mike Long the Boss Rat and H Connolly is the sheikh’s adviser Mustapha Look.

“Dick Whittington” opened on Thursday at the Coronation Hall and runs until tomorrow (Saturday) evening. 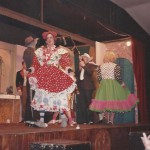 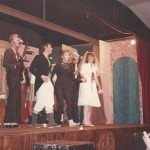 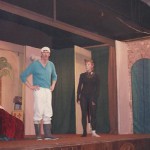 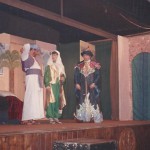